As a child in the 1950’s, I spent a lot of my time in Milson Park at North Sydney, New South Wales. My parents never seemed to worry too much about me when I was there. 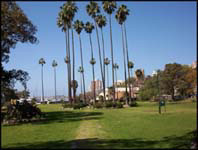 Ulleswater, the block of flats where we lived, sprawled along the ridge above the park. From our back room you looked down on some sections of the park. If you raised your eyes, you could clearly see the northern end of the Sydney Harbour Bridge, rising above the Kirribilli skyline.

Despite its rather formal design, Milson Park was, and I am sure still is, a wonderful place for children to play. When we played there, it was equipped with a couple of sets of swings, a slippery dip, some seesaws, and two tall metal ladders to climb, with poles to slide down. There were paths to wander or manoeuvre bikes and scooters along, as well as plenty of flat grassy spaces to play games.

About twenty giant Cabbage Tree palms grow in the park, half of them growing in a circle in the middle of the park. They tower above the park, making you feel quite insignificant. After windy weather, some of the large palm leaves would litter the gardens and grass. It was fun to drag them around the park, so long as you were careful not to cut your hands on their sharp edges. 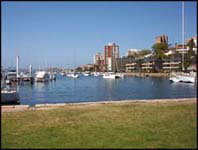 At the end of Milson Park lies Careening Cove. An inclined sandstone sea wall rises from the water to meet the park. Before this wall was constructed, sailors beached their boats on the shoreline as the tide changed, allowing them to make necessary repairs. It was from this practice that the body of water that laps the seawall derived its name.

It was on this reclaimed section of parkland that a somewhat, as they say, “defining moment” occurred in my life. I noticed an artist painting a scene of the cove, with its array of bobbing boats dotted around at various moorings. Being a rather inquisitive seven year old, I sidled closer so I could see more clearly. I stayed for some time, observing with interest the painting in oils and smelling the linseed oil as the artist occasionally thinned the texture of his paints. He did not seem to be distracted by my presence. I watched in fascination as he skillfully captured on canvas a colourful interpretation of Careening Cove, a part of my childhood backyard.

From memory, no conversation between the artist and me took place. Talk would have been an intrusion and inappropriate.

That evening, I told my mother about the artist whom I had seen that afternoon in the park. But as I told her, I found myself unintentionally embellishing my narrative. According to my new interpretation of events, I had actually spoken to the artist that afternoon. Indeed, we apparently had had quite a conversation. I had proudly told him about my Uncle Tootsie who lived in England and who was also an artist. Thinking back on these events, I had no reason to lie about what had happened. I guess I must have thought my mother would have really approved of my sharing the information about my uncle. And she obviously did from her reaction.

A couple of weeks later, my father arrived home, full of excitement. He opened that morning’s newspaper and, after an introductory “Listen to this”, proceeded to read from a column entitled Town Talk:

A small boy became fascinated with the work of an artist painting in Neutral Bay the other day.
“I like art and stuff,” said the child. “I’ve got an uncle who’s an artist.”
“Indeed?” said the artist. “What’s his name?”
“Uncle Tootsie,” said the boy.
Uncle Tootsie turns out to be quite an artist. The boy’s name is Low – and Uncle Tootsie is David Low.

(Sir David Low, my uncle, was born in New Zealand. He worked for the Bulletin in Australia before heading for England in 1919 to make his name as a world famous political cartoonist. His letters to my father were always signed “Toods”, a nickname from childhood.)

I reckon my heart must have somersaulted its way through my father’s reading of this newspaper item, leaving me confused and anxious. At that moment many thoughts and feelings must have been whirlpooling in my mind – What did it mean? How did my words get there? And they weren’t my words. Well, they were a close paraphrase of my lies. But it was all wrong! It didn’t happen at Neutral Bay anyway. It was Careening Cove…Soon the cold realization dawned that hardly any of this newspaper account had happened at all. The only place it did happen was in my imagination! But I didn’t know it was going to be printed for all and sundry to read! All these thoughts rushed higgledy-piggledy through my mind.

Apparently a family friend with “newspaper connections”, on hearing the story from one of my parents, thought it would make a cute news item. I did not have the nerve to own up to my dishonesty, especially when neighbours and friends were starting to see me as some sort of local hero. My mother even proudly pasted the newspaper cutting in the front of my photograph album. It was there for all to see whenever family and friends gathered and wanted to view the latest photos of “young Jimmy”.

It was some forty years before I revealed to anyone what had really taken place on that afternoon back in February 1955. Any guilt associated with my behaviour has now mellowed with the belief that it was just a child’s overactive imagination at work. I still believe that I told my mother what I thought she wanted to hear. Things had started with an innocent conversation between a mother and her son. The publication of my account gave it credibility, which it certainly did not warrant, as well as a much wider audience. But in so doing, it became part of my history. While I never denied it, others had no reason to doubt what I had related. The artist never came forward to challenge events. And why should he? It was not part of his history, or was it?

When I think back on this event in my life, it makes me reflect upon all those things I have read and accepted as fact, as well as the number of things I have been told by others. How much of it happened? When I see how easy it is to change the facts, it makes me wonder.

As historians, we learn to consider with care the facts we read or are told. What is the source of our knowledge and can it be challenged in anyway? Are we reading or hearing what someone thinks we wish to read or hear, or they want us to believe? Embellishment, poor or unintentional selective memory, clever editing to avoid embarrassment and the like, the rose coloured glasses through which some innocently document the past, and flagrant dishonesty with the facts – all these and more need to be considered when trying to understand our history.

What did or did not happen that day in Milson Park in 1955 had some profound outcomes for me. It changed my history. If I had spoken to the artist and proudly told him about my uncle, well, there would have been nothing wrong in that. It was a piece of information which was true and which he might have appreciated hearing. But I did not speak and because of what happened, when I attempted to rewrite history, I have often tended to be rather reticent to push in front of people things that I have actually accomplished. This is not perhaps a suitable quality for someone with a creative nature. And I am not referring here just to my creative ability with the truth! Charcoal Annie: She Died A Mystery