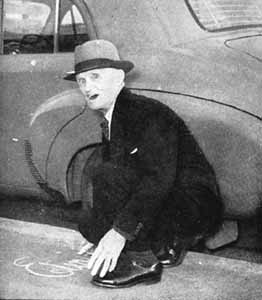 The year 2000 burst into life with an explosion of colour, as fireworks painted the sky over Sydney for almost half an hour.

The display climaxed with the gradual appearance, through a residue of smoke, of the word Eternity. It was written in yellow lights across the centre of the Sydney Harbour Bridge arch.

For many, the sight of this word would have awakened old memories. For me, it was enough to transport me over 40 years, back to the streets of my childhood in North Sydney. The word, carefully written in yellow chalk, would mysteriously appear on the streets of my suburb. It was always viewed with fascination.

On a visit to North Sydney in 1993 I recalled some of the places where I had seen the word Eternitywritten in my childhood years. There was something special about its appearance in your own suburb. It also seemed very special when you saw the word on your own or when it looked like it had just been written and the chalk had not yet faded. I find that the word has a certain power to trigger other childhood memories. It was not until I was a teenager that I heard about Arthur Stace and his story. 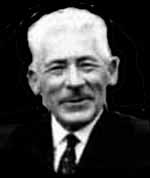 Stace was a veteran of the First World War. His background was one of poverty, little if any formal education, heavy drinking, gambling and petty crime. In November 1932 he attended a church service at the Burton Street Baptist Church in Sydney. It was here that he heard the evangelist John Ridley preach on the subject of Eternity.

“What a remarkable, uplifted, glorious word,” Ridley spoke in his sermon. “It is essential that all preachers should remind their congregation, time and again, that they are travellers to eternity.”

Arthur Stace was so moved by Ridley’s words that he decided to write the word Eternity on the streets of Sydney and beyond, and did so for the rest of his life.

His daily routine was to wake early, have an hour of prayer, a cup of tea and then take to the pavements of Sydney, writing the word usually before most people had started their day. He even travelled as far as Wellington, Cessnock, Wollongong and the suburbs of Melbourne to write the word. In June 1956 Stace’s identity was disclosed and since then he has been affectionately known as Mr Eternity. 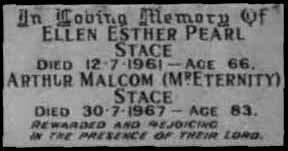 For me, the fascination surrounding Mr Eternity persists to this day. My 1993 visit to North Sydney and the childhood memories it awakened resulted in my writing a song. The idea of a man deciding to write one word upon the streets of Sydney and its suburbs for more than thirty years is unusual to say the least. The word that I saw a number of times as a child in the 1950’s had already been written by Arthur Stace for over twenty years. Such repeated practice had resulted in a perfection of style. As a child, this did not go unnoticed. These were still the days of the copper plate writing style when we dipped our pens into small ink bottles, neatly inserted in school desk tops, and learnt to write by repeated practice.

The look of the word and the way that it rolled effortlessly off the tongue, were intriguing for any child, not to mention its meaning. With the latter you were introduced to a concept of time which was hard for any young mind to understand without some sense of anxiety.

The writing of Arthur Stace could never seriously be viewed as vandalism, although on a few occasions he was cautioned by the police. The temporary nature of the chalk used was in direct contrast to the message communicated by the word.

DOWNLOAD or LISTEN to ARTHUR STACE [Mr Eternity] talking to 2GB announcer Jim Waugh in 1964. It was replayed by the ABC several years ago after John Barwick from Gunnedah who recorded it in 1964 on an old tape recorder sent it into the ABC. John also gave a copy to Rex Beaver who in turn gave us permission to reproduce his copy here.