Sydney’s northern harbour foreshores were an important part of my childhood playground. Where the southern end of High Street met the harbour, a ferry wharf perched on the elbow bend between Careening Cove and Neutral Bay. In the 1950s the wharf was still named after High Street. An old, wooden structure, it has been replaced a couple of times and is now called North Sydney Wharf after the suburb.

High Street ferry wharf in my day leaned out, on wooden piers, over the waters of Sydney Harbour. Photographs attest to this wharf having been there since the 1890s. The old wharf’s waiting area, reminiscent of an old boat shed, was surrounded by long, wooden bench seats. You walked through this area and descended a couple of steps onto the wharf deck. Through the cracks in the old, rough timber boards, you could see and hear the constant lapping of the tidal water beneath as it ebbed and flowed. These boards seemed long ago to have trapped the smell of the sea in them. I can still smell the salty, damp air that surrounded the wharf. Everything smelt of the sea.

As children we would watch each ferry increase in size as it chugged across the entrance to Careening Cove, heralding its arrival with a fierce churn and froth of water. Then the whole wharf would shudder when the ferry slammed unceremoniously into the front, buffer posts. There was always an exhilarating feeling when you stood on these massive, moving, grey chucks of wood that formed our wharf. I can still remember that mixed rush of excitement and anxiety as the wharf began to dance on its piers at the ferry’s abrupt arrival. The wharf creaked and squealed under these daily assaults. 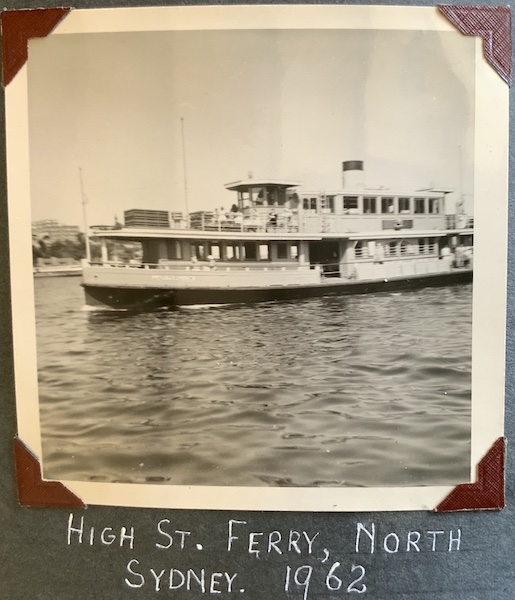 Simultaneously, a rope was thrown by a ferry hand, tightly lassoing a rust coloured, metal fixture attached to the deck. Then the water exploded underneath our feet. A wooden gangway with metal railing clattered noisily onto the wharf steps, allowing passengers to alight or board in haste. The water continued churning and frothing as the ferry departed across Neutral Bay.

On this wharf in the late afternoon, we sometimes set a wire and metal fish trap. It was secured by rope to a timber beam before it was submerged under the wharf. Returning around sunrise the next morning we would haul the trap to the surface, revealing the night’s treasures – leather jackets of assorted sizes, various seaweeds and kelp. A couple of times the catch included a small sea horse. After careful examination, the trap’s contents were returned to the harbour.

In the 1960s Australia’s contenders for the America’s Cup Challenge were moored at the entrance to Careening Cove. The Royal Yacht Squadron is nearby on the opposite side at Kirribilli. From the wharf we would often see the 1962 challenger, the 12 metre yacht Gretel, and later the 1967 contender Dame Pattie, gently bobbing up and down to the random rhythms of the harbour. From there they were put through their paces on Sydney Harbour in readiness for their overseas challenge. Both yachts unfortunately proved unsuccessful in their attempts.

The open harbour shore land to the left of the wharf was then used by the local council. Previously it had been a sandstone quarry and the cliff wall to the rear is still evidence of that. The area was undeveloped, open waste land. Being accessible to the public it afforded another place for children to play amongst the council’s rubble. We sometimes used to ride our scooters down to the wharf. I remember once riding mine too quickly on the final descent down High Street. Turning into the council area I hit the gravel, lost control and fell flat on my face. I can still remember immediately asking my brother for reassurance as to whether ‘I was hurt or not’, as if he had suddenly become a doctor.

In the 1960s the area was repurposed into parkland and called Kesterton Park after a former lord mayor. Small, covered picnic tables and seats were thoughtfully positioned to take advantage of the impressive harbour views. There were also some swings. I often wandered down to the park with a book or just to enjoy watching the ferries. I always found the gentle, lapping sounds from the harbour’s perpetual motion very soothing.

Years later when reading Louis Stone’s Jonah I was reminded of those carefree days. While sitting with his lady friend at Cremorne Point, the protagonist Jonah likened the ferries that he saw to Mrs Potts irons. This memorable comparison rang true when I remembered the small, rounded profiles of the ferries I had watched as they plied their way back and forth around the harbour.

A number of years ago while visiting North Sydney Stanton Library I saw a poster by Peter Kingston. This imaginative artwork with its colour, dynamic and detail captured a slice of Neutral Bay and its shoreline, above which stands May Gibbs’ former home Nutcote. Kingston’s poster rekindled for me those wonderful, childhood imaginings which the harbour waters first inspired. No wonder I used to appreciate any opportunity I had to get close to the harbour shores. The harbour had a seductive appeal and still does.

It’s no surprise that Leslie Rees found Sydney Harbour such an appropriate setting for his children’s book Mates of the Kurlalong, published in the year of my birth, 1948. The book tells how, after a series of strange events, a Wombat gathers together animals from Taronga Park Zoo. They then help him crew the ferry Kurlalong on a voyage of adventure around the harbour.

The harbour waters were our link to the world. People first came by water to this land. Early paintings and writings inform us of the significance of the harbour for First Nations people. In the 1950s most Australians left ‘for overseas’ by sea. As a child I can remember farewelling friends and relatives who left on the huge ocean liners. We grabbed and held the colourful, paper streamers which were thrown from the deck as the ship departed. I still remember that sinking feeling when the streamer finally ripped from your hand.

That little wharf at the end of High Street certainly played a significant part in my early years. It introduced me to Sydney Harbour and all the daily happenings on its foreshores and waters. I became aware of its continual motion and its wonderful sounds and smells. It helped to stimulate my imagination, becoming a favourite place of play and later quiet reflection.