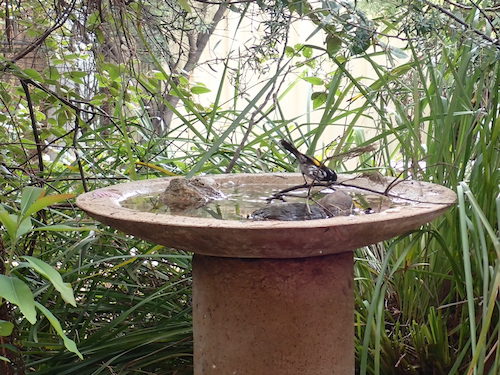 At my new home near the Blue Mountains National Park, 21 years ago, I put a birdbath in front of a glass door where I could look out and began replacing most of the garden’s exotic plants with local native plants. Magpies, currawongs, rosellas, bowerbirds and others came to drink or bathe. As the native garden matured, little bush birds began to arrive.

Watching and learning about wild birds over a long time can bring great joy. Different species have different habits and preferences. White-browed Scrubwrens take a leisurely bath in the shallows. Eastern Spinebills plunge into the deeper part of the pool and quickly fly out. New Holland Honeyeaters bathe with tails up out of the water. Thornbills, wrens and finches, in small flocks or family groups, flit in and out between the bushes and the edges of the bath. Ever watchful, a sharp-eyed Blue Wren will detour to snatch a tasty moth or spider from the door screen or house eaves. The Grey Fantail, an infrequent visitor, dances prettily around the rim with brief plunges into the pool. I once saw a young Eastern Yellow Robin doing laps.

The old birdbath developed cracks and was leaking badly so, early this year, I began looking for a replacement. It had to be just like its predecessor, with gently sloping sides into a shallow bowl. For weeks I searched the mountain towns and the internet and found nothing suitable. Then I visited a little nursery at Leura and the birdbath I had been looking for was delivered to my home the following afternoon.

The new birdbath was installed in front of the same glass door, underneath the spreading branches of a Banksia, Grevillea and Correa growing on three sides. It was made locally of crushed sandstone and decorated with a few seashells. I thought it looked beautiful.

But, the birds didn’t like it. At the same time the previous day, dozens of little birds of several species had taken turns at the old birdbath but now they looked and flew away. What was wrong? Do birds feel safe in familiar surroundings and sense danger when there are changes?
The next morning I put three rocks in the bowl, threw in a handful of dead leaves and balanced a slender branch across one side. That afternoon I sat down to watch the tennis on TV (and the birdbath outside the door). A little flock of thornbills came to bathe and then a New Holland Honeyeater. Rafael Nadal won in straight sets. Then it rained for three days.

The rain cleared and I noticed White-browed Scrubwrens at the bath. They love the water and bathe often. But instead of the usual two, there were four. Two fledglings could be identified by the pale gape around the beak. I rejoiced for the little family that had made its home in the garden and their acceptance of the new birdbath I had found for them.