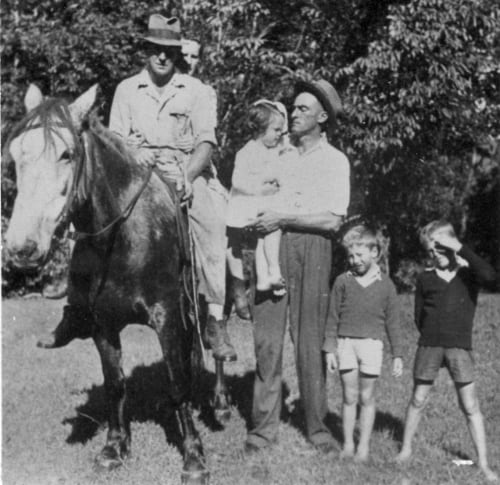 [box] Chris Woodland is the son of Chris Woodland, a Timber Inspector for the NSW Government Railways stationed at Taree during the 1940s. Please note as the author had the same name as his father, he was known by his second name, David, until later in life. [/box]

Only my parents would have a greater influence on my early, and possibly later life than Guy Prior. This was not because of the fact that he was one of our family’s closest male friends. My adoration for this man, who was the same age as my father, evolved because he was a very colourful, physical person and was a living example of the men who were scattered among the many folk tales of my father. These two men, and the overlapping stories of my mother, plus her enthusiasm for literature and historical knowledge, sowed the seeds for my future passion.

My parents met the Priors through mutual friends by the name of Lukins, Eric (known as ‘Pan’), Vi and their baby daughter Marie. My earliest memory of Dot and Guy Prior was when I was a little under five years-of-age and my parents and the Lukins had met at the Priors to play cards. Marie was in a pram or bassinette and was just beginning to talk.

We lived at 120a Victoria Street, Taree and the Priors rented a house only a couple of blocks away, tucked a short stone’s throw from the highway – (Victoria Street was part of the Pacific Highway) – on the corner of Florence Street and Florence Lane. The Lukins had a milk bar on Victoria Street nearby, like us, on the riverside of the highway.

At the time (1942) Guy was working at the Peter’s milk factory at Chatham. In reflection, this was an unusual occupation for a man who was one of the few who was a born-to-be dairy farmer. Many believe that dairy farmers are born, not made; the seven-day week, early rises in the morning, the floods and dry times, the cropping, the extremely low monetary return in those days and the hard physical work of seven days a week and no holidays, were not the choices of most men and women. Horses were still the main means of transport and for ploughing paddocks and all other heavy farm work. Tractors, though not unknown, were very few and far between. Electricity was connected in the towns, but its magic was yet to pulse out to the majority of farms.

Except for a few incidents I know very little about Guy’s early life. He was born Guy Urial Prior in 1906 at Albion Park on the south coast of New South Wales. At some time his family found its way to the Hunter Valley area. Here he became a well-known roughrider, winning at least one blue ribbon for his buckjumping ability. It could have been his horsemanship and accompanying no-nonsense, tough and independent manner that attracted a beautiful redheaded lady who was to become his beloved ‘little Dottie’.

Margaret Dorothy Horadam was born at Singleton in 1914. People thought it possible that her most unusual surname was a misspelling by an immigration officer or other government official when the family first arrived in Australia, as was a common occurrence, particularly names of Celtic origin. Perhaps the family name had been Hourigan. Horadam is not a common name and a search on the Internet shows that the large majority of people with that name reside in the Hunter region of New South Wales.

Guy and Dot were married in the Hunter Valley, probably West Maitland, in 1937. However they met, their courtship was threatened by the common bigotry of the time. Redheaded Dot was of Irish Catholic ancestry and Guy was of Orange background, his family refusing to accept her as a daughter-in-law. Guy made his decision and his last words ever to his family were spoken as he stood on their verandah step with a saddle over one shoulder and a suitcase in one hand. ‘Good-bye and bugger yers!’ was his farewell. Guy always had a colourful turn of phrase.

No one could ever claim that Guy was religious, however he always respected that his wife was and supported her by attending Easter Mass with her every year. Guy was a very hard and tough man, however his love and tenderness for his ‘little Dottie’ was sincere and wonderful to see.

[box type=”info”] NOTE: All photos were taken on Blore’s dairy farm on the Cundle Plains. The Priors were share-farming on the Blore’s 50 acre dairy farm.[/box]