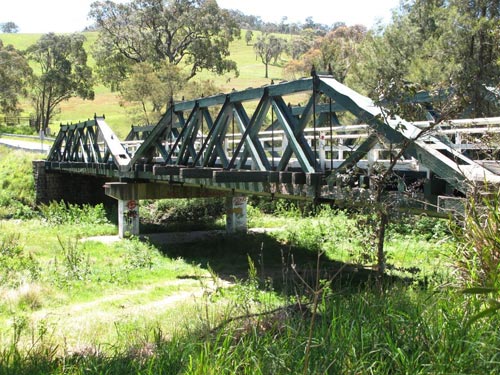 Although the roads around Lithgow are often lacking in easy places to stop and devoid of luxurious facilities, there are some intriguing spots along lonely thoroughfares.

The reserve beside the bridge on McKanes Falls Road looks initially to be a haven for weeds. However, there is a pleasant walk through the Casuarinas along the rock pools of the Coxs River not far away. The sub-structure of the bridge itself lives up to the claims made for it by the historic marker.

The truss bridge is a reminder of how stone and timber infrastructure helped the development of New South Wales transport system. This is particularly so in the rugged valley areas of the Greater Blue Mountains.

The plaque beside the bridge reads:

In 1884 John A McDonald introduced a new timber truss design. His bridges were a significant technical improvement on earlier designs being stronger, easier to build and maintain and allowing for a future increase in loads. McDonald Truss bridges were significant in the development of the colonial road network. This 1893 bridge was an important transport link within this region and is an excellent example of the 91 built, of which only five remained in 2002.

The Institution of Engineers, Australia and
Roads and Traffic Authority NSW, 2002