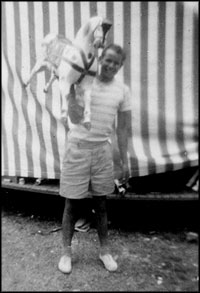 The sun rose above the canvas,
Still moist from evening dew,
Beneath the tarp the young warb stirred,
Only partly frozen through.

The warb is just the sideshow hand,
Driving trucks and rigging tents,
Usually paid the least amount,
To lower the expense!

Crawling from his canvas cave,
Fully clothed in crisp cold air,
Notes the horses of the carousel,
Standing wooden with no care.

Icy water to splash his face,
No showers to be found,
A few tin sheds in a paddock,
Of another bush showground!

A mug of tea, a bit of toast,
With the boss beside his ‘van,
He and his missus both good folk,
Battling as well as they can!

Other warbs are passing,
Say G’day and how are you?
Heading in one direction,
The showgrounds long drop ‘loo!

The young warb gets to his feet,
Stiff limbed just like a corpse,
If this must be his working life,
His body will be warped.

A couple of grey haired ladies,
Stride slowly as they went,
With trays of scones and lamingtons,
To the Country Women’s tent!

Dodge ’em cars all parked in rows,
Steel floor of grease and dirt,
Grudgingly swept by another warb,
In shorts and tattered shirt!

Tent boxers around the campfire stand,
Brews in blue enamel mugs,
Turned up collars of their shirt,
Can’t hide the cauliflower lugs.

Past the brightly painted tent,
Of the pygmy named UBANGI,
Widely known to one and all,
From Toowoomba down to Trangie!

Back to the little merry-go-round,
Old 78s in a stack,
For that is how the ride is times,
A short song for their Zack!

Soon the early crowds approach,
Through the rusty steel turnstiles,
To see “Belinda Lee from Tennessee”,
With the wriggling writhing reptiles.

Kids astride their snorting steeds,
Giggling and absorbed,
He is glad to hear their laughter,
Sometimes it’s good to be a WARB!

The year was forty-four, near the end of the Second World War,
There were many things we learnt to do without,
There was one particular can, we didn’t want in our tiny hands
And it contained the dreaded Brussels Sprout .

As I was only ten , with many things I didn’t ken,
There were others who knew much more than I did,
So I sought a brother out,and asked “What’s a Brussell Sprout?”,
He says “I think it’s a little Belgian kid”.

Our Old Man was real smart, but with money loath to part,
He was well up with life and all it’s lurks,
As well he had this Mate? who’s just as up to date,
Who managed to find things where he works.

The Old Man’s high with glee, he’s got something nearly free,
As he stacked the box into a wooden barrow,
He pushed it out the back, into the laundry shack,
This wooden crate covered with the black broad arrows.

Us kids just stood around, with the box there on the ground,
It all looks quite mysterious to me,
For there’s nothing on the side, to say just what’s inside,
Just some tins with letters marked D-D.

The Old Man takes a hold, of a tin that’s painted gold,
Us kids worked up so much we really want to shout,
“C’mon Pa”, we all exclaim, “Have the contents got a name?”,
“Strewth! we’ve got a box of Brussels Sprouts”,

Us kids ain’t got no Mum, to make the kitchen hum,
On most days the tucker’s pretty crook,
With the cooking up to us, the results are sometimes suss,
So we’ll open a tin and take a little look.

The Old Man poked the opener in, the golden painted tin,
Out came a sound like someone being throttled,
Us kids were really scared, we were just not quite prepared,
For someone to let a Genie from a bottle.

And then the smell arose, and singed the hairs up in our nose,
As heaving stomachs headed for the sink,
“Good Gawd!”, the Old Man cried, eying the stuff inside,
Round things sort of purply, browny pink.

Us kids must look around, for somewhere to go to ground,
For the gas was permeating everywhere,
With twenty-three tins still sealed, to the Old Man we appealed,
“Don’t make us eat them if you really care”.

“Aw!C”mon now you kids, this tucker’s cost me quids,
“And someone’s got to eat the bloody things ”
He threatened us with the belt, but they tasted like they smelt,
And we’re well prepared to bare our tiny limbs.

Yes! we copped the belt, through our joy it hardly felt,
That night we ate some taters and some mince,.
Going in them spurious sprouts, smelt even worser coming out,
And I ain’t never,ever ate one since.

Genial Johnny was a showman,
With a tent variety show,
Magic acts and animals,
Well known out on the road.

He had lions and some ponies,
Plus monkeys, quite a few,
The lord of all these primates,
Was an olive King baboon.

Johnny owned a swag of trucks,
Out on the dusty track.
A flat top carried the lions,
And the baboon on the back!

A Cane-ite sheet divided,
The rusting metal cages,
No one seemed to notice,
It was thin as paper pages.

The trucks all lined in convoy,
Driving till the sun was nil,
On the bumpy, dusty gravel roads,
On the way to Broken Hill!

The city lights still miles away,
In the dusty morning gloom,
The least of all their worries,
Was the olive King baboon.

Thirty yards the distance,
Behind the lions truck,
The trailing driver senses,
Something’s about to come unstuck!

One long toot on the old Chevs horn,
A warning all should stop,
One look at the raging Leo,
They knew he’d blown his top.

The lion claws the Cane-ite,
The baboon’s quite alarmed,
He can’t escape the mauling paw,
Leo’s got him by the arm.

Johnny’s eyes are bulging,
All are standing there non-plussed,
The baboons arm flies through the air,
Lies quivering in the dust.

Two blokes distract the lion,
Try and calm the blinding rage,
While Johnny and one other,
Drag the baboon from its cage.

The King baboon is mesmerised,
Staring at the bloodied stump,
Eyes go round like a chocolate wheel,
As it collapses in a clump!

Johnny calls for fishing line,
Canvas needle from the truck,
Cool as a plastic surgeon,
He sews the bugger up.

Wrap the baboon up real tight,
Protect from shock and chill,
All take off like the “clappers”,
The next stop Broken Hill!

Reach the town in darkness,
No Vets around till morn,
Take the baboon to the hospital,
Plonk him in the casualty ward,

To the doctors it’s a challenge,
He’s patched up very soon,
Johnny’s thinking of a banner,
The world’s first one-armed baboon!

Inside the dusty brick kiln,
Outside the pelting rain,
Four young blokes wiping raindrops from their heads,
We had rushed up from the river,
Where our sleep had been curtailed,
No more the river grasses for our head.

We acknowledged with a nod,
Each others presence in the kiln,
Spoke our names and shook hands as we meet,
And I pondered lifes next episode,
As we sat there in the gloom,
Little Titch, Johnny, Jim and Pete.

Peter says, “Let’s try to sleep”,
“And at the break of dawn”,
“We’ll check the farms to see what work they’ve got”,
So it was we trampled,
Through Mooroopna to Ardmona,
Where a cheerful chap requested we pick his apricots.

Swinging ape like in the trees,
We pluck the apricots all day,
When in our beds we’re sure we won’t survive,
Then one night a rattling rap,
Upon our crude hut door,
In the dark, standing there a bloke about forty-five.

He says,”I’m goin’ round warnin’ blokes”,
“Young fellers just like you”,
“About some growers mingy with their pay”,
And he warns we should be cautious,
About the bloke we’re working for,
We should ask four times the rate for holidays.

He talked for many hours,
About the workers need to rise,
And give the capitalist bosses what they’re due,
He aimed his talk straight at me,
The most ignorant of them all,
“Christmas is when you act, Jim, Johnny, Pete and you.

An hour or two before the dawn,
He tapped his pipe and went,
Past our empty fruit trees now all stripped and bare,
Then next day from laden trees,
We searched from ladders high,
But we couldn’t see the agitator here nor there.

Our gang of four now picked the crop,
And each night when darkness fell,
We discussed the things the agitator had to say,
And decided that come Christmas time,
For us to pick the apricots,
We’d ask four times the going rate of pay.

On christmas eve we gathered round,
To tell the grower what we thought,
Standing stiff our hands behind our back,
He listened while I had my say,
Then said, “Here’s the deal Young Titch!”
“Take your three mates with you, you’ve all been bloody sacked”.

Through Ardmona and Mooroopna,
Back by the way we had come,
At least our picking had earned a tidy shillin’,
We wondered about the agitator,
And the apricots left to pick,
On Christmas Day outside the old brick kiln.