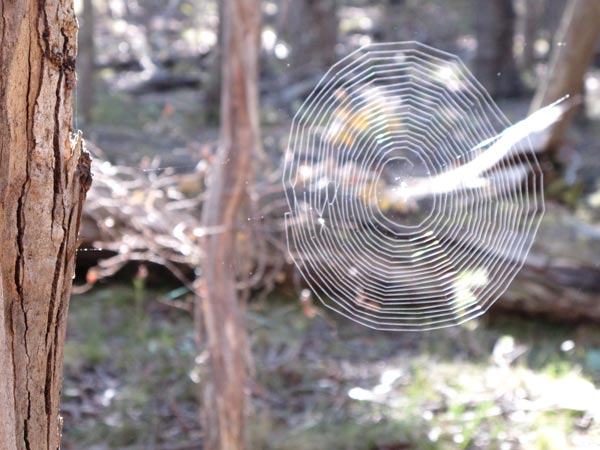 From the Taralga to Wombeyan Caves Road, 2WDs or 4WDs can access a fascinating variety of landscapes. Near this trail junction, sunlight filters through the ribbon gums, reflecting into a Lilliputian world of spider webs, colourful fungi and pools.

For thousands of years the Gundungarra people inhabited areas of the southern Blue Mountains like this one. Important trading routes were described in legends that reinforced the geographical features by which generations of indigenous people navigated through densely vegetated bushland. The most significant surviving Gundungarra legend, the Gurangatch and Mirrigan story, describes a route from the Wollondilly River to Jenolan Caves and Duckmaloi Walls.

No doubt, stories about many other areas like this one were lost when the European invasion displaced the traditional Gundungarra lifestyle from the southern Blue Mountains. The Croker’s area is like an area north of Medlow Gap where part of the surviving legend is placed – Mirrigan creates a waterhole by forcing his snout upwards through the soil after tunnelling.

At atmosphere of peace exists here. But the abundance of termite mounds, the intricacy of the spider webs and the constant tumbling of dead or wind affected branches into the waterholes are testament to constant change.