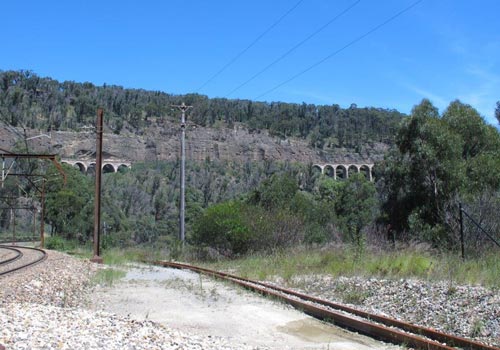 John Whitton, chief engineer of New South Wales railways from 1856 to 1889, left at least three monuments to his career in spectacular natural locations. The piers beside the current Hawkesbury River rail bridge at Brooklyn and the Knapsack viaduct at Lapstone are notable. But it is possibly the series of viaducts on the Great Zigzag at Oakey Park near Lithgow (completed in 1869) that most impress today’s tourists.

Viaducts of the “middle road” of the Great Zigzag are visible above the existing western railway. They enabled Sydney bound trains to ascend the side of a canyon carved by a small tributary of Farmers Creek. The landscape of sandstone cliffs and pagodas is a strikingbackdrop to Whitton’s world-stunning engineering feats.

The revegetation from the 2013 “State Mine Gully fire” makes the scene even more impressive as one looks at Eucalypts astride the ridgetops and spurs with epicormic leaf growth making sleeves along their trunks and branches.

Since the suspension of tourist trains on the Great Zigzag, it is more challenging for visitors to view these viaducts but the photograph shows it is still possible.

Much of the native vegetation in this area would have been cleared during rail construction and nearby development of the coal mining industry. A rich mixture of natives and exotics now adorns the Zigzag formation and the base of the adjacent canyon. Mistletoe surmounts the canopy of the Eucalypts descending to the creek.