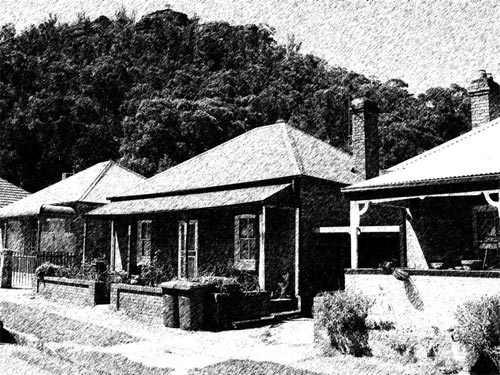 Richard Inch and his brother converted Mort’s old meatworks to the Blue Mountains Brewery during the years 1902 to 1904. The pockets of development around Lithgow contain a number of distinctive styles of housing which were largely occupied by manual workers engaged in the various industrial and mining enterprises which have defined Lithgow’s history. Few are as picturesque as the brick and stone cottages in Bragg and Brisbane Streets, near the brewery in Oakey Park.

They are mainly single storey, with an occasional upper storey. A few have original looking verandahs. The size of the windows and the thickness of the walls attest to the severity of the winters. Elaborate and ornate chimneys survive on some of the cottages. The numerous watercourses through the subdivision have never been piped and the riparian vegetation and old wooden foot bridges are a feature of the area.

Contributing to the visual spectacle are the rings of hills, cliff-faces and pagodas surrounding the elongated Lithgow basin. It is hidden treasures like this which make Lithgow a photographer’s paradise.