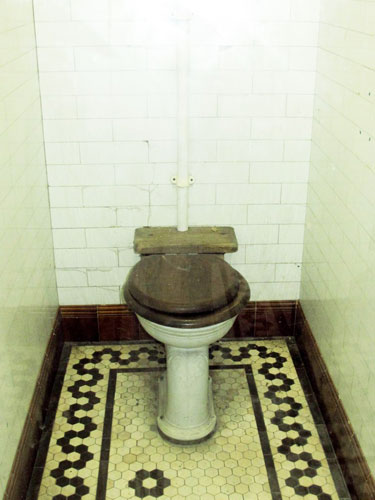 When one bushwalks, all of one’s bodily essences are stirred. So it is comforting to find Thomas Krapper’s invention, the water closet, at a location of convenience. The depicted example (of 1900-1910 vintage) in the Men’s at Mount Victoria’s Imperial Hotel is possibly the oldest functioning water closet in Australia.

Even so, it is not the only auspicious facility in the town. The entrance to the Ladies’ in the park opposite is flanked by a Henry Lawson mural. Fortunately the Lawson poem used is about a Mount Victoria local legend, not his 1892 poem: “The Queen has reigned for 50 years, for 50 years and 5, she’s yet to do just one good turn to anyone alive!”

Because … this township of tasteful toilets was named after the ruler of the British Empire while she was still Princess Victoria. It’s important that the amenities block decorations do not disparage said sovereign. If a time machine allowed Victoria to travel to her Australian tourist town in 2016, her majesty might not be amused. But she could certainly be fittingly enthroned!