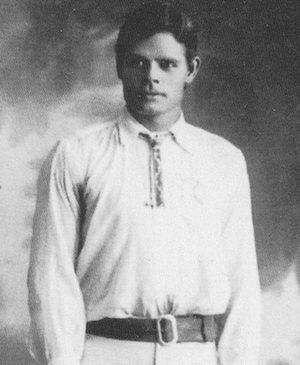 This image of Billy Waite  was taken was taken shortly after he defeated Lance Skuthorpe at Brisbane in 1907.

This night we hear for the first time of a man who was to gain legendary status in the world of rough riding. An Aboriginal man from the Longreach area, Billy Waite, with Martini’s assistance, was to become one of the most popular buckjump riders in his time. A well-built and handsome man, with marvellous riding ability and showmanship, he was to become a favourite with the thousands who would see him performing around the country and overseas.
On Martin’s Roughriders 1 last night in Cairns, or so the advertisement stated, Dargan’s Grey proved to be a ‘rough un’, throwing Waite and a local man. The Morning Post said that: the little pony outlaw is wonderfully fast at disposing of his mounts.

The show did other performances around Cairns, but probably at another venue rather than where the annual show was held. At one event a Mr E. C. Earl attempted to ride Dargan’s Grey for a wager and actually remained in the saddle for one circuit of the ring before the inevitable occurred.

The press announced that Martini’s show would be leaving for Port Douglas and Mossman on Wednesday 17 June 1903. Several days before their northward journey Martini’s group joined a group of about 600 people and attend an unveiling ceremony for a Dr Koch, a late resident of Cairns. Martini and his troupe would often attend such social functions. No doubt it would help his good name and, of course, his business.

The paddle steamship Lass o’ Gowrie sailed out from Cairns on the 17th with Martini’s Rough Riders aboard. Press reports are now less frequent until an advertisement in the Cairns Morning Post of 3 July says that Martin’s Rough Riders will open in Mareeba:

Go and see the great Outlaw, Dargan’s Grey, and other amusement – on 7th July.

It appears their venture to Port Douglas and environs was a limited one and they returned to the vicinity of Cairns and visited the Atherton Tableland.

The entertainers travelled through Charters Towers – where they amused the locals with their various talents – then worked their way to Croydon, a gold town in the savannah country 529 km west of Cairns. Croydon was the name of a 5,000 square km pastoral holding which was settled in the 1880s. Gold was discovered in 1885 and the new mining town took the name of the pastoral station. One can assume that the group had a successful season there with the large population of miners and associated businesses supporting their endeavours. It was late September 1903 and four months were to pass before they again received mention in the press.

This was the occasion when they make their way to the Gulf Country town of Normanton, which takes its name from William Norman who manned a ship in the search for the ill-feted explorers Burke and Wills some forty years earlier. In the 1890s a trainline was built between Croydon and Normanton. From here ships freighted gold from the mines of Croydon, and delivered heavy steam driven machinery, goods and supplies to those residing in this isolated mining area and to the immense cattle stations. There was also a large population of First Australians in the earlier days before they were removed to reserves such as Doomagee and Mornington Island. However, the Aboriginals were still around in good numbers when Martini passed through. The Indigenous people have always been passionate rough riding participants and audiences, so we can assume that Martini would have done well in Normanton and similar areas. The Aboriginals were always enthusiastic to try their luck in riding the buckjumpers.

It is doubtful if Martini’s Rough Riders and their circus cavalcade would have fitted on the Gulflander train which ran from Croydon to Normanton as the train only ever had four, then three, carriages. With temperatures in the mid 30s and very dry conditions there would have been minimum feed for the animals as they made their way through the colourful, dusty and sundrenched landscape.

From the Port of Normanton we can safely assume that Martini and retinue accompanied their animals and wagons on a ship to Thursday Island. The next time we hear of them is at the lower Gulf Country town of Cloncurry where they opened 16 April 1904. It is obvious the travellers returned from Thursday Island to Normanton, which is about 380 km north of Cloncurry.