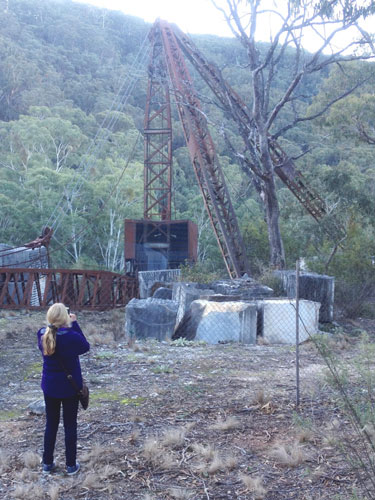 Marble – metamorphosed limestone – has captivated people through history. At Wombeyan Caves are marble formations as breathtaking as the limestone formations of Jenolan. Nearby is evidence of modest attempts to obtain marble for architectural purposes.

A steam crane that was first engaged in constructing Sydney’s Spit Bridge is spending its rusting years overlooking Wombeyan’s western marble quarry. It was a tremendously challenging operation to cut the marble into geometrically precise blocks, using strong wires to separate the marble from the karst.

The unusual quality of the rock can still be perceived by visitors to either the western or northern quarries. To appreciate the use of the marble in a built environment, you need to go as far as the Taralga Hotel and admire the marble hearth stone, transported from Wombeyan to be placed in the lounge in the north western corner of the ground floor.

Examining this aspect of the Greater Blue Mountains mining history is fascinating. But don’t let it leave you short of time to admire the caves themselves. Marble and limestone are at their most wonderful when seen in the timeless structures of an underground paradise.