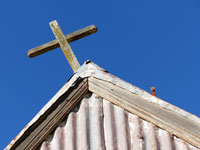 Returning from Victoria in late January 2016, I left the Hume Highway at Coolac and headed up to Cootamundra. Just north from there is the township of Wallendbeen where I noticed a modest, boarded up church. Stopping to take a photograph, I saw that there was no signage to identify the building. Fenced off on a hillside in a paddock, this lonely, discarded little church of local granite stone appeared to have lost its identity and use.

I later discovered that the building had been a Presbyterian church, subscription funded, built in 1882 and closed in 1948. Miles away, under the shadow of the Sydney Harbour Bridge in November 1948, I was baptised at St John the Baptist Church of England in Milsons Point. The realisation that this little church at Wallendbeen had never functioned as a church in my life time, saddened me.

This once valued and loved building, a social and spiritual hub of the area and a significant part of many people’s lives, was now lost in the landscape.

‘They have one of the neatest little churches to be found in any part of a country parish’, the Lithgow Mercury of 5 June 1906 proudly proclaimed about the newly built St Matthews Roman Catholic Church at Lowther. This once thriving area of farmers, graziers and loggers is situated on the road to the Jenolan Caves. Built in 1905, St Matthews Church was opened and consecrated in June the following year.

Erected on stone foundations, this quaint building is comprised of galvanised iron, steel-lined interior and polished New Zealand pine floor boards. It was named after the local priest Father Matthew Hogan, who worked so hard to see it built. Able to seat a congregation of about 100, it replaced an older church which had been moved from Mt Victoria about 35 years previously. In 1906 the parish still owed about half the building cost of 200 pounds. A social dance, at which the ‘Depression Chasers’ Orchestra from Oberon provided the music, was still needed in September 1934 to aid the Church fund.

Church buildings such as those at Wallendbeen and Lowther did not just materialise overnight. Their construction usually required great effort, cost and tireless commitment from their congregations. And they fulfilled a need, for they were wanted. Sometimes all this is forgotten when we stumble on a lovely little church like St Matthews, set in a picturesque location but now is closed and deserted.

Out on the back-roads
the churches are dying.

Published back in 1975, we could now justifiably replace ‘dying’ with ‘dead’, for many of these churches are permanently closed or in various stages of ruin. Some survive as private residences or community centres but in doing so have lost their original identity and function. Now we can also include the many churches on the main-roads that, as Page says, ‘strain beneath the wind’ in varying stages of ruin.

In Frank McMahon’s poem Ruined Church – Collector, the poet describes the ‘scatter and decay’ that is present in the ruins of a church between Goulburn and Canberra. He reflects on the final day of worship and ‘how it came to this’. The poem finishes with memorable and powerful images, as the congregation:

‘…left the last to leave to shut
abandoned things behind a pointless door.’

For some time now I have been photographing derelict country churches that I see on my travels. They come in all stages of ruin. I always worry that if I don’t take a photograph, on my next visit it will be too late to do so. A number of times that has sadly been the case.

For those of us who stopped attending church many years ago, these buildings still hold indelible memories. The scripture stories and texts, the choruses, the hymns and the fellowship are not easily forgotten or disregarded.

In 2009 I wrote a song about the disappearance of functioning churches from the Australian landscape. I unintentionally echoed the first line of an old hymn I had learnt as a child. It went:

There is a green hill far away,
Without a city wall,
Where the dear Lord was crucified,
Who died to save us all.

The hymn was written by the Irish writer Cecil Frances Alexander, apparently during the night while nursing her sick daughter. It was published in 1848 in Alexander’s Hymns For Little Children.

In today’s society the role of the established churches do not figure as prominently, if at all, in many people’s lives. But in the past they played a very significant part in the community. They were meeting places and their members were collectively referred to as congregations. They were places of worship, sacred buildings, houses of God where people found sanctuary from life’s tragedies and uncertainties. People experienced the variety of human emotion as lives were informed, influenced, challenged, celebrated, united, comforted, changed and mourned in these buildings.

For some, the churches were places where dogma and inquiry uncomfortably co-existed; where indoctrination and free-thought sometimes inevitably collided. They were places where one’s duty to God and to the state could be severely tested when balanced against taught ideals and the weight of conscience. In times of crises they championed the power of prayer and tested rigorously the faith they nurtured. Whether harvest or drought, birth or death, gain or loss, war or peace, the church was expected to always be there and find some meaning in it all. And now they are quietly vanishing from the landscape, ‘their future … denied’.