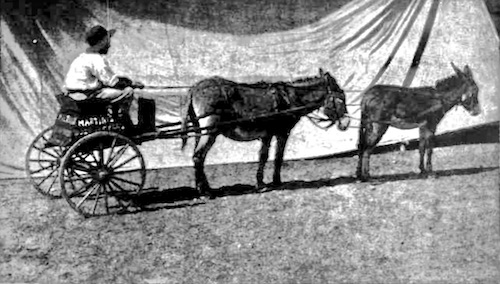 It is in Cloncurry in late April that we first hear of a horse that will be as famous as Dargan’s Grey. No name is given for this buckjumper at this stage, but it is mentioned in this line from The Evening Telegraph (Charters Towers):

Playing to a large audience on 3 May a W. Allen, in attempting to ride a horse called Kruger, was thrown and trampled on, causing injuries. Dargan’s Grey threw a man by the name of Campbell twice and another, a H. Parker, once.

In early June the North Queensland Register (Townsville) reported that the buckjumping show would open in Richmond where there would be ample opportunity:

… for the local riders to show their adhesive powers in the pigskin.

A few days later the same paper showed a photo of a Martini tandem mule team harnessed to a small miniature trap with a driver aboard.

While displaying a photo of the crowd-drawing Dargan’s Grey in the advertisement below, a sketch of a rough rider astride a wild buckjumper was also included. From now on many of the press articles were mere copies of the text from these advertisements.

The entrepreneurial showman had also discovered the telegraph wire, to be known as the telegram, and he notified the Charters Towers’ press to inform them of the buckjumping show to open in their town at the Cremorne Gardens on Wednesday 22 June. Readers were assured that the old grey is still unconquered and:

… there is still the £100 challenge to anyone who can sit him.

The show had also picked up a small Spanish horse known as a jennet, which is a notorious bucker.

At one of the exhibitions in the Cremorne Gardens, Dargan’s Grey threw an Aboriginal by the name of Jack Collins in 18 seconds and also threw Waite very heavily. The ad shows, that there were several other attractions for the audiences. There was also SPECIAL SEATING ACCOMMODATION FOR LADIES.

In Richmond Frank Armstrong from St George was on Dargan’s Gray for only one-and-a-half seconds and was in the local hospital for ten days. The bucker Bryamine had still not been dubbed the name he will be known for until this day. The show played in Richmond for most of July and provided the only entertainment for the otherwise miserably dull town. The township of Richmond soon emptied when the shearing began and all the men left for the stations for the mustering and shearing.

Early August in Winton saw Martini’s Rough Riders playing to good houses after which they moved on to the Muttaburra races. They were there at Longreach when the races took place there on the 23 and 24 August. Travelling shows always attempted to attend the various functions such as annual shows, exhibitions and horse-races as the usually quiet townships would become heavily populated with the men, women and children streaming in from the stations, mines and missions to join in and contribute to the infrequent entertaining diversions. Waite rode all the rough horses in Longreach, and the local reporter penned:

Waite is a magnificent horseman. Good as he is Dargan is his master.

Martini and his entourage arrived at Barcaldine for the races. Dargan was as successful as ever and the Western Champion (Barcaldine) had this to say:

Martini, who was with Fillis’ and other big circuses, gave splendid exhibitions on the horizontal bars; he is a champion in his line-indeed, he does his work remark ably well, and performs several blood-curdling act[s].

They next performed at Blackall, then Tambo and Charleville, working southward. It was at Charleville that Aboriginal Black Alick from Boonah said after being thrown from Dargan’s Grey: Dat feller, him budgeree Yarraman. (( Good horse. Budgeree meaning good and Yarraman horse. )) It is now mid September 1904.

From Charleville they head due east and performed at Roma on 4 September. Almost everywhere, they were received with moving accolades in which the various performances were often detailed, Martini’s remarkable feats on the bars, Miss Mena Val’s tight-wire walking and other talents of hers, Billy Waite’s spectacular horsemanship, the members of the group who may be singing, playing musical instruments, dancing or stunt riding and, of course, the youngsters that continually provide much amusement in their attempts to ride the mule and donkeys, and the serious buckjumpers, particularly the old grey.

There was an ad in the Darling Downs Gazette in December that was the first of its kind. Martini now includes in his ads:

Two years and six months Touring Queensland, and now Returning from the Gulf.

Of course the ‘Two years and six months,’ would have to be adjusted as time passes.

They reached Toowoomba by late December and enjoyed a large audience on the 24th but held no performance on the evening of the 28th so as to give the horses a rest. Martini also donated 5/- (five shillings) to the local ambulance brigade.

It was in Toowoomba that Dargan’s Grey, the famous buckjumper that drew large crowds wherever he travelled, received a serious injury. The papers said Dargan’s Grey could not perform as he had wrenched his fetlock in a contest in Toowoomba. They added:

the 20 years old Dargan’s Grey has thrown all riders who mounted him, except for three exceptions. One of his masters was the ill-feted Harry Morant (the Breaker).

The age of the famous buckjumper varies from time to time.