By mid-May Martini and a performer called Marlo were doing their acrobatic performances at Charters Towers, inland from Townsville in Queensland, at the Theatre Royal as members of the Lucifer Variety Company, and then in Townsville the week later.

About two weeks after Townsville Martini was still with Lucifer’s when they visited Rockhampton and performed there, then he appears much further west at Barcaldine with the Souquet Brother’s Circus in the first week of July. Barcaldine’s Western Champion reported:

The Souquet Brothers have with them Martini, the champion triple bar performer in Australia. His somersault of 20 feet from bar to bar must be seen to be realised.

In the fourth week of July the town of Maryborough hosted several evenings of entertainment from the Souquet Brothers and their attractive star Martini. A month later both Marlo and Martini – really wonderful horizontal bar performers – were highlighted when the press advertised a benefit evening for a Mr George Ward at Brisbane’s Opera House. The Telegraph also stated that Mr Martini is well known in Brisbane and that Marlo and the Brisbane Courier cites: they will be doing their wonderful triple somersault on [the bars]. 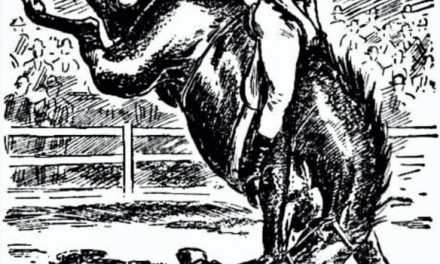