On my last trip to Victoria in July this year, I deliberately planned to spend the night in Benalla so I would have time to visit Stringybark Creek. This was the place where, on 26 October 1878, the Kelly gang, comprising Ned and Dan Kelly, Steve Hart and Joe Byrne, confronted a party of policemen who were out searching for them. Sergeant Michael Kennedy and Constables Thomas Lonigan, Michael Scanlan and Thomas McIntyre had made camp in the vicinity of Stringybark Creek. The Kelly gang had a camp nearby at Bullock Creek. There they were gold mining and distilling whiskey in order to raise money to defend Ned’s mother in her upcoming court case. Obviously feeling under threat of discovery, it is believed that the bushrangers sought out the police with the initial intention of stealing their weapons and horses. 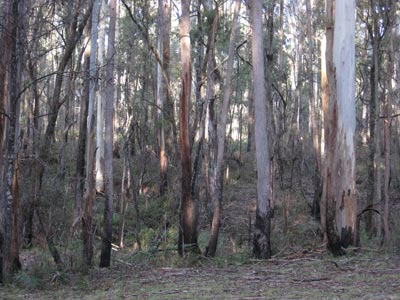 To drive to Stringybark Creek from Benalla in northern Victoria involves a twenty five kilometre round trip along some narrow, unsealed sections of a logging trail that ascends steeply into the Wombat Ranges. Recent rains made for a slower trip and I arrived at the creek around four o’clock in the afternoon. It was also late afternoon when three of the policemen were shot and killed by the Kelly gang.

Stringybark Creek is a place I have wanted to visit for a long time and I was excited at the prospect of my visit. Over the years I have sung songs, read books and poems, as well as watched documentaries and movies about the Kelly gang. But despite all this, I still felt I knew very little about what really happened at Stringybark Creek and why the events that occurred there are still remembered by many Australians. 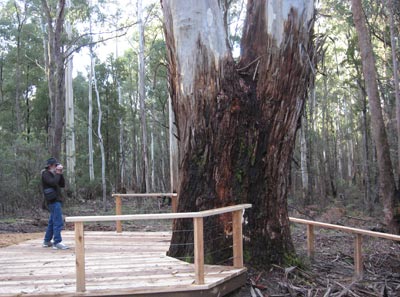 By visiting the site I hoped I would gain a little more knowledge of the Kelly narrative which now uncomfortably scrambles mythology and historical fact. The late historian Manning Clark always believed that one could learn more about historical events by visiting the places where they happened. Perhaps, I thought, my visit to Stringybark Creek would do this for me.

The scene at Stringybark Creek is quite secluded and very picturesque. Tall stringybark gums dominate the landscape and casually drape their long, bark strips across the bushland. While I was there bird cries, including the kookaburra, echoed sporadically along the valley. The dampness of the setting gave a stronger pungency to the bushland scents and made walking in places a rather slushy experience. The fading afternoon sunlight conjured up a cold, fragile beauty, edged with a lonely, melancholic sense of the place. As I left the creek to its night time rituals I was warmed by full sunlight still drenching the western descent of the ranges. It was as if I had just stepped from the canvas of a Frederick McCubbin painting. 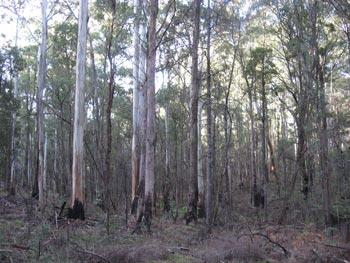 Back at Benalla that night I reflected on my afternoon visit to Stringybark Creek. All those who survived the shootings interpreted what happened, giving their own version of events. The reliability of such accounts still remains uncertain. Many people loyal to Kelly always believed the fatal shots were fired in self-defence. I began to write the first lines of what would later become a song:

“I stood today at Stringybark Creek
Where those fatal shots were fired.”

In 1989 I was asked by the NSW Education Department to record some bushranging songs about the Kelly gang. They were included in some learning materials which supported the teaching of Jean Bedford’s book Sister Kate in high schools. One of the songs I recorded was Stringybark Creek, the words of which, according to John Manifold, were collected by W.J.Wye in the Strathbogie Ranges in the early 1890s. The song is often sung to a tune called “Paddy Fagan”. That was the version I sang and, although I like the tune, it does now seem rather inappropriate with its jaunty, light hearted feel. 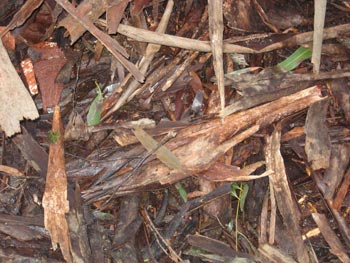 Stringybark Creek is remote in its location. The tragic killing of three of the four policemen, shot by the bushrangers on that fateful afternoon, just over one hundred and thirty years ago, sits uncomfortably in the story of this hauntingly beautiful place. As a result of these deaths, Ned Kelly and his gang were outlawed and a large reward quickly placed on their heads. They would be hunted, as the song Stringybark Creek says, “like outlaw dingoes of the hills until the day they died”. 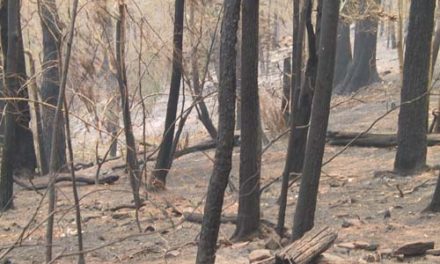 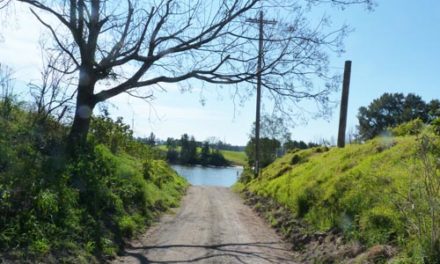