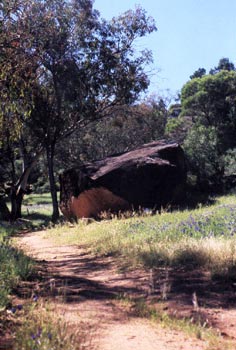 When I walk
I do not know
what ancient sacred place
my foot may desecrate
or if my tread shall fall
where some cult-hero bled,
or shed blood,
or gave fire to man
in the far dreamtime.

(from the poem Intruder by Ian Mudie)

On Sunday afternoon, 15 June, 1862, Frank Gardiner and his gang, which included John Gilbert and Ben Hall, ambushed and robbed the gold escort which was travelling from the Forbes goldfields. The bushrangers had arrived earlier in the day, so as not to be noticed by any passing travellers. They had positioned themselves behind a large granite rock near the old coach road at Eugowra Mountain.

About six kilometres on the Orange side of the township of Eugowra, a roadside monument next to a rest area now reminds travellers of this event and directs their attention to a cluster of boulders strewn about the hillside behind it. The rock behind which the bushrangers hid and waited for the gold escort is one of these. It is now referred to as the Escort Rock, rather than its Aboriginal name of Coobang or Coonbong.

When I last passed through this area I stopped to look at the monument. I had previously been reassured by a friend that, despite the rock being on private property, it was permissible to walk up the hillside to view it. Keeping to the faint pathway through the grassy paddock, I headed slowly up the hillside. Purple flowers of Paterson’s Curse dotted the paddock. On that sunny Spring morning, the surrounding countryside was an exhilarating sight.

Arriving at the rocks, you could clearly discern the old road along which the gold escort would have travelled that June afternoon some one hundred and thirty seven years ago. Over the years the wheels of many coaches and bullock drays had eroded the surface of the road, leaving the middle rock section raised above the grass.

It was a tranquil setting, in sharp contrast to the terrifying commotion imposed by the bushrangers upon the gold escort: the harsh sound of gunfire as it reverberated intrusively across the countryside, the smashing of the escort coach windows, the panic of the horses as they reared in fright, the painful evacuation of the wounded police officers and coach driver, the crash of the coach as it hit a rock and overturned. This was followed by the excited, eager cries of the bushrangers as they plundered the coach for its spoils. All this accomplished in the late afternoon light, visibility further reduced by dust and gunsmoke to create a rather chaotic and fearful scene.

The large rock is believed to be the resting place of the spirit of an Aboriginal warrior and a place of Aboriginal ceremonial significance. I noticed that the word ESCORT had been painted on the rock. As I wandered around the rock, stood behind it in the place where Gardiner and his mates would have waited and prepared their guns, I quickly realised that their actions did not sit well with this area. I wondered whether frontier existence often really did play a significant part in more easily brutalising the behaviour of people like Gardiner and Gilbert.

As I walked down the hill to the roadway, I wondered what thoughts the average Australian would take with him or her after a visit to Escort Rock.

Listen to the song and read the lyrics: Eugowra Station by Jim Low