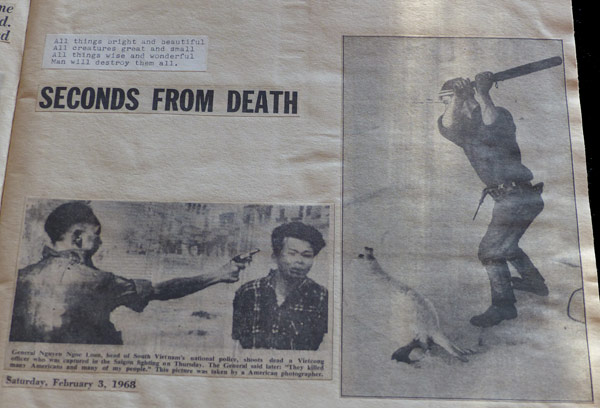 Humans are not our enemy – even those called ‘Vietcong’.
If we kill our brothers and sisters, what will we have left?
With whom then shall we live?

from Condemnation
by Thich Nhat Hanh

It’s practically impossible
to tell civilians
from the Vietcong;

after a while,
you quit trying.

from Guerrilla War
by W.D.Ehrhart

It is one of those images that you will always remember. I first saw it fifty years ago in a Sydney newspaper, on 3 February 1968. A black and white photograph, it shows one man holding a gun to the head of another, whose hands are bound behind his back. The man with the gun is the only one wearing a uniform.

The brief report accompanying this photograph read as follows:

“General Nguyen Ngoc Loan, head of South Vietnam’s national police, shoots dead a Vietcong officer who was captured in the Saigon fighting on Thursday. The General said later: ‘They killed many Americans and many of my people.’ This picture was taken by an American photographer.”

Apparently the face of the alleged Vietcong officer had been so badly battered by his captors, prior to his execution, that even his relatives could not positively identify him after his death. 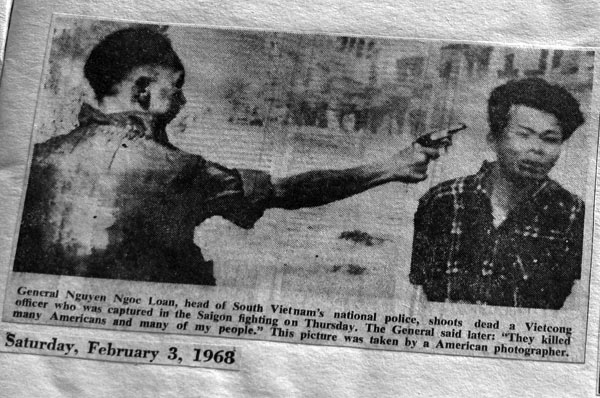 I have since seen film footage that was also taken of this killing. It was included in the 1974 Peter Davis documentary Hearts and Minds. Everything happens very quickly in the film footage. The alleged Vietcong officer is wearing short trousers and a white singlet under what looks like a flannel shirt, He is barefooted and his hands are bound. The General takes out his gun and shoots him in the head, without hesitation.  As the body collapses to the street, the General holsters his gun and walks away. It is a very chilling piece of film. You have just witnessed the end of a life, a merciless killing and a violent crime. This was part of the Vietnam War in which Australia fought. Young Australians like myself were being conscripted by our government to participate in this undeclared war.

The newspaper image I saw early in 1968 unsettled me. It frightened and angered me. The photograph showed how warfare can make a person behave brutally. The photograph seemed to sum up the injustice and random cruelty of war. In it we see the last moment of a person’s life. I had been raised to believe that all life was precious. The photograph made me feel guilty and implicated in its barbarity. Could warfare ever be considered just? For me, the photograph was saying a definite ‘no’.

I cut the photograph out of the paper and later in the year pasted it into a scrap book, next to another newspaper photograph. I used the headline for this photo to describe both pictures: SECONDS FROM DEATH.

The second photo was that of the killing of a seal pup. The beginning of this report, dated 7 April 1968, that accompanied this ‘dramatic picture’ read:

“The baseball bat in the bloodied hands of the hunter will soon smash its skull. The ice will turn red with blood…”

The report also revealed that apparently 42 000 seal pups had been killed for their pelts in the Gulf of St Lawrence.

1968 saw the whole of South Vietnam ‘embroiled in a vicious all-out war, which had already ripped apart much of the fabric of society…South Vietnam had been turned into a crucible of suffering.’(p134) These words come from Truong Nhu Tang’s revealing Journal of a Vietcong, his life as a revolutionary. Tang was a founding member of the National Liberation Front of South Vietnam and a cabinet minister in the Provisional Revolutionary Government. I came across his book in a second-hand bookshop in the Victorian country town of Benalla in 2007. Tang’s path crossed that of General Loan whom he says was ‘not known for the gentleness of his methods’.(p 108) Apparently after the war Loan emigrated to America and ran a pizza business, again proving the strangeness of truth.

About ten years ago, I was looking through my old scrapbooks and came across these photographs, carefully cut and pasted by me all those years ago. I again experienced the uncomfortable rush of disbelief and anger. I was moved to write a song about the street execution of the alleged Vietcong officer. This photograph summed up for me some of the wrongs of war:
the unavoidable inhumanity, the diminished value placed on life, the attempt to normalise base behaviour, the despicable cruelty and suffering, the wayward delusions, especially by those in powerful positions, the fabrication of history and the everlasting despair, loss and sorrow.

The interceding years after the deaths, misery and suffering that was the long, Vietnam War appear to have taught us very little.

The man with the gun
Is deluded by war
The general of police
An upholder of law
He presses the trigger
And puts out a life
Does he return
To a lover or wife?

The general believes
That he’s done nothing wrong
This man killed Americans
This dead Viet Cong
But the general’s a killer
The kind to abhor
I’ll never believe
There’s justice in war.