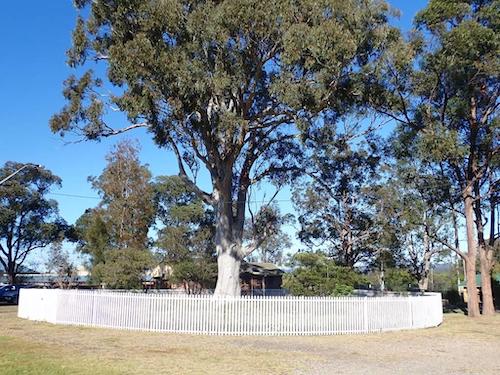 The landscaped spaces of the mountains contain native trees of many ages. The older Eucalypts are especially represented in Glenbrook Park – a major gateway to our region.

There are many reasons to stop at Glenbrook Park. It has one of the best Visitor Information displays. It’s our Australia Day park and hosts other community events. Coming from Sydney, it makes you feel you’re not in the city … and it’s the first rest area, petrol and toilets after the freeway. Within the park is the theatre used by the indefatigable Glenbrook Players dramatic troupe.

In 2016, Council contemplated major changes. The levels of the park surfaces were thought by some to pose a flood risk to surrounding properties. A draft plan canvassed the expendability of many of the older trees and buildings. Blue Mountains Conservation Society, Glenbrook District Historical Society and many others came to the defence of the ambience of Glenbrook Park and its trees. That’s probably why the park still looks as it does.

In this park, the trees are an opportunity to have a conversation about how the hollows and other features of the older specimens are vital for the welfare of multiple lifeforms. These, of course, include mammals, birds and insects.

It’s very useful that visitors’ first chance to pause when entering a new region gives them a true sense of place. The subtle changes that have been made to the park and the retention of so many old trees allows Glenbrook Park to do that. It’s one of the few mountains towns to convey a sense of a village green or common. To retain these functions, in coming years, new native trees will need to be planted. Meanwhile, the park is a place that residents and local organisations can take pride in.