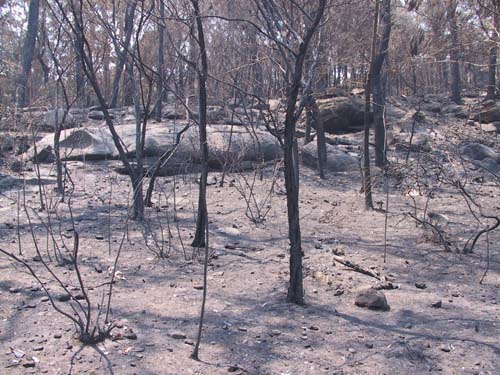 There’s a grey black smoke column
Rising over Valley Heights’ way
Heralding
A warning on this heat-oppressed day.
And the birds and the animals
Now they are standing still
Statue-like
It’s eerie on this heat oppressed day.

The bush explodes all around
And leaves burst from the trees
Balls of fire
There is no time to think, “When will it ease?”
And just as quickly it races past
And leaves your troubled mind
Wondering
How this killer left some life behind.

Read our article about the 1951 Blue Mountains fire 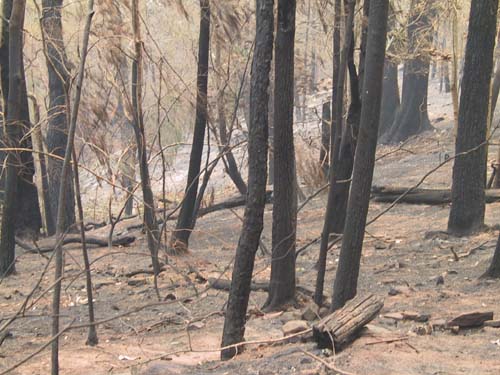 Like many parts of Australia, the Blue Mountains to the west of Sydney in New South Wales has experienced the savage bushfires sweeping the country. Homes have been destroyed and businesses and livelihoods were lost when fires impacted on the villages in the north and west of the Mountains in the last days of 2019. Thousands of hectares of precious world heritage National Park have been ravaged and sadly countless numbers of our precious wildlife have perished.

Bushfires are not new to the Blue Mountains. They occur on a regular basis although never on such a scale or for such a long period as these most recent.

Mrs Jean O’Gradey and her family had not been living in North Springwood for very long when they were confronted by bushfire in December 1951.

She and her husband and their two young boys were living in a three room home with no neighbours and no electricity or water supply. Their only transport was by foot. The main road was dirt and there was no telephone or fire brigade.

When the fire came they had to do battle with it on their own.

Jean O’Gradey’s account of these terrifying events were recorded in an interview she gave to Maryanne Quinn in June 1964 for the Blue Mountains Oral History Collection. Here is a transcription of part of the interview as well as a song inspired by the event.

“My first experience of a bushfire was in 1951. 1 can remember the day. It was a real summer day that got hotter and hotter. I can remember going out and watching the animals and birds we had at that time and they were all very quiet. Everything was still and even our goats and cow were just stock still, they were just standing.

“I can remember looking over towards Valley Heights and seeing a column of smoke and that was after lunch. By five o’clock it had started to move and the wind had got up. My husband had been out and he came home and said, ‘Quick, there’s a fire coming. Get all the animals together’. So we put them all up as close to the house as we could.

“Then all of a sudden the fire hit us four ways at once. We were just surrounded and nobody could get through to us from Springwood. We were just sitting in the middle with a wall of fire around us. I can remember putting the kiddies in the pram and standing them up the front. We didn’t have time to think. There was too much to do all at once because we were looking after the animals and my husband was down lifting the fowls out.

“In that was all our wedding presents, linen, my husband’s tools. I put the fireball out and crawled out from under the house. All I can remember is running and the next thing I knew I was on top of the bark hut ripping the burning bark off and throwing it away. When all that was done my husband sang out, ‘Where are you? How in the devil did you get up there?’ Looking around there was no way, nothing to get up on. They reckon we are related to monkeys – well, it must have come out in me that day because I must have jumped. 1 got up and that was all I could remember. All my husband could do was stand there and laugh. He had to roll a drum over fir me to get down. But at least everything was saved. It was only a matter of half an hour and the fire had passed.”

Read the lyrics and listen to the song, There’s a Fire © Jim Low