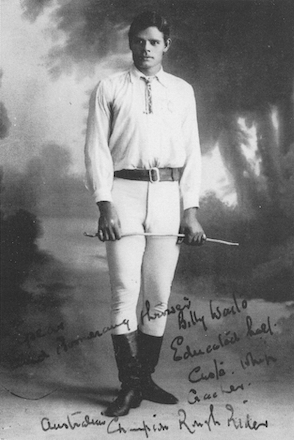 It is a fact of life that nothing stays the same, and so it was with Martini’s convenient and profitable venue. With the continuing alterations to the area around the new Central Station, Rawson Place (a continuation of Eddy Avenue) was to be opened up.

Martini’s advertisement in the pages of The Australian Star of Wednesday 6 May 1906 read:

Before Martini’s Buckjumpers left their five-and-a-half-month idyllic venue, they continued providing top quality entertainment for their patrons. The Wednesday night of 12 May saw a military contest of thirteen men compete to be the best rider in their group. All of these aspirants were thrown, but a Gunner Thompson won the contest. A special £5 amateur competition using stock saddles began on the same evening.

As would be expected, a large crowd attended the Monster Farewell Programme where a Mr Lazarus, on behalf of the staff and patrons, presented Martini with an impressive inscribed diamond medal as a token of esteem. Everyone’s favourite, the gifted Billy Waite, was presented with a gold medal for defeating Lance Skuthorpe for the Australian championship and was backed to the value of £200 against any rider in Australia. The Dempsey brothers were each given a silver mounted riding whip for their spectacular exhibitions of riding. An advertisement in Sydney’s Referee stated that the horses would be rested now for some time and that the show would then travel through New South Wales and Victoria with their popular acts. This advertisement concluded with the statement: Positively no connection with any other show.

This announcement was the first in many to accompany Martini’s advertisements as deceitful competitors were claiming they had the horses and riders with the same names as Martini. Because of Bobs’ fame, Martini would soon be including the horse’s brand in such public notices.

On the Road Again

Enjoying a rest for over two months Martini’s show was back in action in early August 1906, performing for two nights at Penrith, then onto Lithgow and Bathurst, the two places he had to abandon when he learnt of the Christ Church site in Sydney. Martini had learnt the advantage of advertising and kept the press, particularly the Referee, informed of his movements by wire well before the event. Now the show was advertising that they had 500ft of new canvas for their enclosure, also:

… champion Bobs and the original Dargin’s Grey, and Salt Bush Bill, the Whip King with Henderson’s Monster Whip, 55ft long, and 40 smaller ones!

The popular Fun in a Stockyard was still advertised, as was the usual:

While not defining the differences between a donkey and an ass.

Advertisements now had J. Martini as sole proprietor and Harry Kennedy as representative. Kennedy would travel ahead of the show spreading the good word, organising venues, and advertising the event. Local riders and horses would also be sought from local sources for the exhibitions.

News items and advertisements for the show appeared along the way: viz. Bathurst’s National Advocate (8 August), the Leader of Orange (28 August), Molong’s Argus (7 September) and the Wellington Times. Bad weather prevented one evening performance at Orange. Milthorpe had a short season at Blackmore’s Hotel and the show appeared for one night at Cumnock.

In mid-September the Molong Argus, in its report of Martini’s Buckjumpers of the previous night (13 September), commenced the article with a doggerel rhyme:

If you want some good fun, I’d advise you to go
This Friday night to the buck-jumping show.
The notorious ‘ Bobs’ at the show you will see
If there’s a horse that can buck, I’ll be bound it is he!
Some ‘live’ ponies and mules Martini has got
If you wish so to do you can mount the whole lot;
They ‘root’ with a will— never stopping to barney,
If you doubt what I say— just ask Johnny Carney!
On Thursday night, too, they lowered the banner
Of Hilary McGroder and young Don Tanner;
‘Tid’ Nelson and Herrick, ‘twixt me and you.
Could ride them all right — if provided with glue.
Martini’s run out of good glue, so they say,
But a thumping supply he’s getting to-day;
So a chance there is still for the lads of the town
To jump up on a mule, and quickly jump down!
Jack Carney rode a winner, and scooped the blooming ‘pool,’
But Martini couldn’t get him astride a frisky mule!;
Of course he could have sat one quite easily I know
But eventually ‘twould hoist him where gentle breezes blow!
Jack Kearns had a ‘mount’ last night at the show,
And it struck me at first that to market ‘twould go;
But it didn’t do that — though had it done so,
This ‘rough rider’s’ cake— well, it might have been dough!
To be candid and straight — not wishing to blow —
‘Tis quite safe to state that Martini’s horse show
Is the most up-to-date to which you can go
lf its bucking you want— and a horseman – you know!

Following the newspaper’s aspiring poet’s effort was a lengthy article giving a detailed account of the evening’s activities, mentioning Billy Waite’s and the Dempsey brothers’ splendid exhibition of horsemanship, numerous lads being thrown by the ponies Midget and Bulls Wool, concluding with:

‘Bobs’ was the last item on the programme and proved a particularly lively one at that. Mr Martini offered a £10 prize to anyone who kept his seat for a whole minute; Mr Sinclair held the coin, Mr Cecil Smith the stop watch, Mr A. D. Millar acted as judge, and a Mr Wilcox (of Oberon) essayed the task of appropriating the prize. ‘ Bobs’ wasn’t long getting to business, with the result that Mr Wilcox and he dissolved partnership within the brief space of six seconds. However, the Oberon horseman was complimented by Mr Martini on the attempt he had made, and the audience clapped him to an echo. Another feature of the show is a first-class exhibition of whip-cracking by Salt Bush Bill. His collection of whips ranges from the ordinary 12ft stock-whip to Henderson’s monster stock-whip (55ft long and weighing I5lbs.) Saltbush Bill cracks this boomer with one hand, and can make the smaller ones crack and cut to perfection. He’s worth seeing is Salt Bush Bill, [he] is a distinct feature of a real good show.

Another item in the newspaper stated that the father of the riders J. and A. Dempsey, had been a resident in the Molong and Orange districts for many years. Of course the famous, but now debilitated Dargan’s Grey, was, as usual, paraded before the audience.

One evening a fortunate Molong audience witnessed the riding of Bobs by Billy Waite who, with no one else wishing to try their luck or ability, sprang from the ground into the saddle and rode without stirrups. It was an experience that would become folklore by those who witnessed the event.

The show continued on exhibiting in Bodangora, Geurie (in the paddock behind the Perseverance Hotel), – a James Nugent broke a wrist while attempting to ride the pony Bulls Wool; a season at Dubbo, then a cancellation at Trangie because of inclement weather.

The Peak Hill Express mentioned that Bobs was insured for £800 and the Molong Argus mentioned that Dargin’s Grey was 23 years old and that the accident to his fetlock at Toowoomba resulted in a lump ‘as big as a pumpkin’. The Sydney-based Referee placed an advertisement on 11October, which stated Bob’s brand in a bid to thwart fraudulent activities involving horses similar to the champion.

MARTINI’S BUCK-JUMPING SHOW,
after a sensational season of 22 weeks in Sydney,
is now touring N.S.W. with 60 Buck-jumpers, 12
Wagons, and 500 square feet of canvas. and will
shortly visit Parkes, Forbes, Cowra, Young, &c.
POSITIVELY NO CONNECTION WITH ANY
OTHER SHOW.
TO THE PUBLIC — ‘BOBS,’ the Champion
Buck-jumper, is a bay gelding, branded ST4 on
the off shoulder. – Beware of Imitations.