Sydney’s Waverley Cemetery is a beautifully situated, amphitheatre-like piece of land that slopes down towards the Tasman Sea. I have visited this heritage-listed place since the early 1950s and am reasonably familiar with its permanent inhabitants, particularly the poets Kendall, Deniehy, Lawson, McKellar and Rod Quinn. Both my parents are also interred in this striking place

In this cemetery in early 2004 I came across a broken column arising from an impressive grave. Knowing that such a column indicated a break between life and death, symbolising a shortened life or accidental death, I made my way over to the inscription. Having a long-time passion for the history of the Araluen Valley I was amazed to find the dedication to read:

Other inscriptions on the striking monument stated that his parents’ remains were also interred there, his father’s within two years of Martin’s death. I was immediately excited at this discovery. The words ‘J. Martini, Showman’ indicated that the interred man had been a person of some distinction during his life, but whose fame had obviously faded with the passing of time. I had never heard of him, nor had others whom I questioned and who had considerable knowledge of Australian history. (As it turned out I had actually read his name several times, but did not know of him. 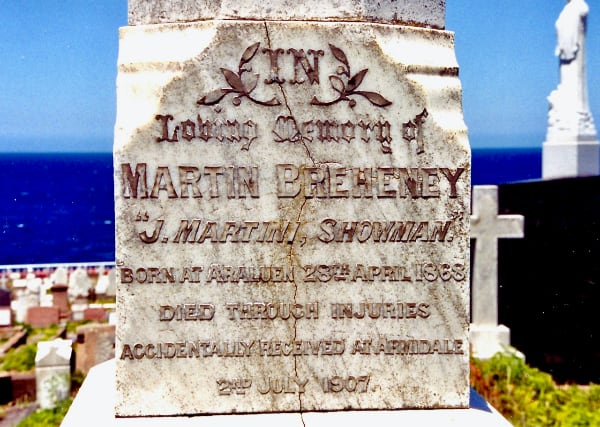 Months later I came across ‘Martini’s’ photo in a book titled, The Lady Bushranger – The Life of Elizabeth Jessie Hickman, written by Pat Studdy-Clift. The photo shown was of a handsome, short-bearded man dressed in what I supposed was a gymnastic outfit. The caption read: J. Martini, Showman (Martin Brehemey [sic]). 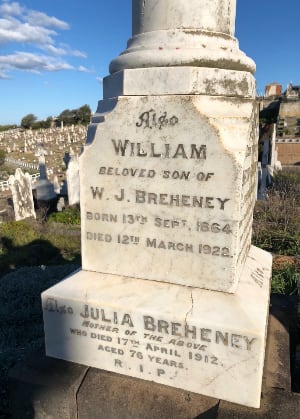 Thus began many years of research, which I continued until I could find no more information on this interesting man who was born in Araluen the year after Henry Lawson’s birth.