Ride From Bathurst to Sydney, in Twenty Hours

In a  Bathurst Sale Yard
One bright May morn,
Where lots of men were waiting,
Amongst the crowd was Skillicorn
And patient Job Manning.
Skillicorn was heard to say,
“I will ride my horse to Sydney in a day.”
Down went fifty pounds by Skillicorn,
And Manning soon covered with three to one.
The money was planked down on a cart,
The night was named for that  great start.
At Bathurst Post Office at twelve o’clock,
To witness the start there was a great flock.
When the clock struck twelve, or played the last trump,
Away went the horse with a splendid jump.
“I’m away, I’m away, o’er the hills I will ride,
The road is my own, my horse is my pride!”
On the road-side we were camped,
And rolled up to a man,
To bid him “good-speed!”
As he passed the “ Frying Pan”
At one-twenty in the morn.
We heard Skillicorn
Splashing, dashing – on he came
As though  the road was level.
If a man in daylight did the same
They would say he was the Devil!
The night was dark,
Mudholes were thick, while
They were deeper than a walking-stick,
And hundreds to a mile.
Then  Diamond Swamps
And Meadow Flats
Full of opossums and native cats.
Then over  Mount Lambey , four miles of a fall,
When he found himself at (now)  Rydall,
Over the junction hills to Assam’s Walls,
Where he thought to cut it fine
By striking for Richmond,
By way of  Bell’s line.
Not far on the way he lost the track;
Without further delay he turned and came back.
Then round  Bowenfels, and down River Lett,
Through  Hartley to  Sheringham’s he soon got.
Here he said, “We will rest awhile,
For we have to do another eighty mile;
So when I’ve a bumper, what can I do less,
Than remember a drink to my bonny  Black Bess.”
Now, up  Mount Victoria, on to  Blackheath,
Where he slackened a little, the horse to breathe;
Then Pulpit Hill and  William’s Chimneys
(No Katoomba then),
He pressed (sic)  the weatherboard lockup,
And soon at King’s Table End.
And now, my boy, we will do it with a will;
As he ploughed the sand, and jumped the rocks,
He was going down the hill.
Then the  Dead Man’s Camp,
O’er Godfrey’s Hill, going with a spin,
As he passed T. Dunn’s “Blue Mountain Inn”.
Then “Eighteen-mile Hollow”,
The old track he’d follow.
At “Cox’s Downfall”
Was going a great rate,
And dropped sixpence for toll
While going through Ellison’s gate.
Now Bull’s Camp and  Springwood,
Yellow mud he did skim,
Passing “Boland’s”and the “Valley”,
Reached Wascoe’s, “The Pilgrim Inn”
When Wascoe, himself, a butcher by trade
Came out to see of what stuff this great horse was made.
Skillicorn, said Wascoe, your house (sic) must be tough,
Be steady going down Lapstone, the hill is rough.
Then so firm he held the reins,
Soon down the hill over Emu Plains,
He reached the little punt,
A short time for a stay.
There was Donald Beatson to the front,
With some wetted oaten hay.
Then over the hill to old St. Mary’s
He soon was crossing the hills of Minchenbury;
Then down to Prospect, here bewilderment set in,
And, with Young Carman’s good advice,
Retraced his steps,
And covered one hundred yards again.
Meanwhile Sydney butchers were in the know,
Saying: “Roll up! roll up! all you that can,
Let us to Parramatta go to meet our Bathurst man!”
On they rode, three score or more,
“Here he comes, bold Skillicorn!”
It sounded like a huntsman’s horn.
Stride after stride along they rode,
The track was not blocked with wood.
At the Victoria Theatre they arrived
Ten minutes to the good.
The journey is over, the bet is won,
In twenty hours from end to end
On that bright boy – the poor man’s friend. 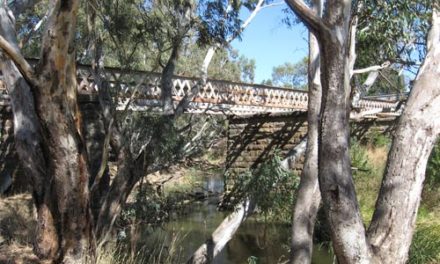 The One Armed Baboon