The Woodland family left Taree in 1950 and the Priors moved shortly afterward. They returned to the Hunter Valley and finally bought their own dairy farm out from Paterson, near Vacy. At last they could work their own land, free from the restraints endured by the share farmer.

The last time I saw Guy was when my cousin John Hawke and I came back from a nostalgic visit to the Taree area in May 1957. We travelled two-up on my BSA Golden Flash motorbike and arrived at their farm a little after dark. Dot came to the door and in the dark was unable to discern who the visitors were. Guy was occupied inside with a couple of guests. Dot went into mild hysteria – she was a very excitable person – even though I enunciated my and Johnny’s names clearly. As she was carrying on like a woman being assaulted Guy raced to the door and soon determined the identity of the visitors. Apparently Dot had thought we were members of a family they were currently feuding with, not an unusual state of affairs with the Priors.

Later, my mother told me of an incident Dot had related to her. There was a progress meeting held, at their local community hall and Guy commented on neighbours who were constantly listening in on the telephone party-line. People became heated and one man was toe to toe with Guy – little did he know he was on dangerous ground – but before Guy reacted in his usual manner Dot raced in and shoved the man with both hands, knocking him to the floor. They were indeed a hot-headed couple.

The morning after Johnny and I arrived at the Vacy farm I arose early and joined Guy in the dairy where he was hand milking. This was the last time I spoke to him. We had a lot to talk about and I recall two things from our talk that morning. He knew I wanted to be similar to him and end up with a farm, but he advised me against it and suggested to keep doing what I was with my life; have a good, solid job in town and visit the bush on weekends and holidays. The other memory is of him sitting, as he milked, in a position where he could keep his eye on the house. He was watching out for Dottie as he was smoking and he didn’t want her to find out. As far as she knew, he had given the habit up!

In his last years Guy taught himself the melodeon, better known as a squeezebox or button accordion. I never heard him play, but wish I had, as it was an instrument I began to play in the next few years.

My wife and I, with our two children, were living in Canberra when I received the disturbing news that the man who had taught me to ride a horse, milk a cow, trap and skin a rabbit, husk corn and many other skills, was dying from lymphatic cancer. He was making frequent visits to the Prince of Wales Hospital at Randwick for treatment and was visited by my mother who lived at Bondi. Of course, his beloved Dot was at his side. This very proud man, whose masculinity was so important to him, told my mother how ashamed he was of his body, a once powerful body that was wasting away day by day.

We visited Sydney and had hoped to see him while we were there, but were told that he had returned home to the Hunter Valley. Back in Canberra, a few days later I was to learn that he had actually been back in the Prince of Wales when we had been in Sydney. He had had to make an unscheduled visit because of failing health.

I am pleased that I wrote to him in his last days and he was apparently excited in reading it and had a good laugh when I reminded him of when he had lost his temper when Denis, Marie Lukins and I did something which now escapes my mind. I also wrote to Dot following his death in 1971 and she wrote a letter which is still in my possession. In it she also remarked on his good and bad habits. Of the latter she wrote, ’Such as the time when you, Denis & Marie spilt the calves’ milk.’ Perhaps that is the incident I have forgotten. Dot also wrote, ‘I miss him so much I could curl up and die’. Dot died in 1979. Sadly, I was not to learn of her passing until thirty-one years had passed, as she had changed her address and passed away before we were notified. 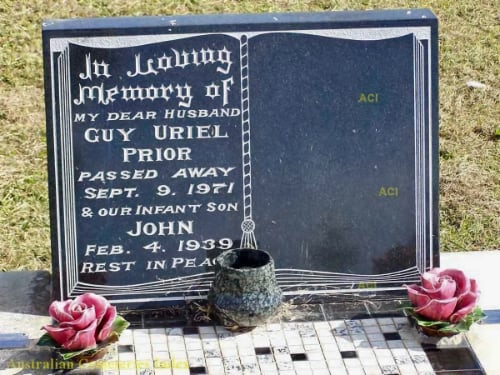 It would be anachronistic to judge someone like Guy Prior by today’s standards. Men like him do not exist today. As we have seen, he was not without his faults. However, he was, to me at least, superior in many ways to the men of his day. He had a typical bushman’s laconic sense of humour, was a powerful and physical man, a good provider, a gentleman with women, but past a certain point, he would rather fight than argue. Especially, he was wonderful with the few children who had the good fortune to know and learn from him, no-one more than I.