Guy also taught me to trap rabbits by the common method of the day, a steel-jawed, spring trap. Understandably, they are outlawed today because of their cruelty, but were then considered to be an essential means of combating the never-ending plague that changed the face of Australia. At first it was almost impossible for me to compress the spring to set the trap by placing the tongue under the plate. Guy would do this for me and I would toddle up to the one little creek that ran across the property or to the lucerne paddock, wherever there were rabbit burrows, or preferably dunghills, or where there was sign of their scratchings. I’d be carrying this device very carefully so as not to spring the trap and perhaps have the steel jaws snap closed on a part of my little body. Deciding the spot to set the trap I would dig out the necessary amount of soil, drive in the peg, place a square of paper over the plate and position a stick under the plate to prevent the soil I was using to cover the plate to set off the trap. Twice I was to find out the effectiveness and pain of these devices. While setting a trap one afternoon, it went off, sprung up and closed on my fingers. Unable to compress the spring, I pulled the peg out and walked back to find Guy, who was at the dairy. With one hand – and that is also how he would set them – he released the grip on my bleeding fingers and removed the offending trap. The second time it happened I pulled the peg out of the ground, laid it across the spring and released my fingers by compressing with a foot on each side of the spring.

Despite these setbacks I soon discovered that I was a born hunter. Even with the odd frost I would bound out of bed barefooted and race up the paddock to see how many rabbits I had caught that night. On returning to the dairy a rabbit or two would make my arms ache with the weight of the catch and traps. In the colder weather my hands would also ache from the cold traps as would my feet from the frost or near frost. Many people have said how, when bringing in the cows for milking on a cold and often dark morning, they would search for the cow pats with the steam coming off them (Guy called these ‘meadow pancakes’) and unashamedly step into them to relieve the suffering feet and digits. It is a fact, it happens! 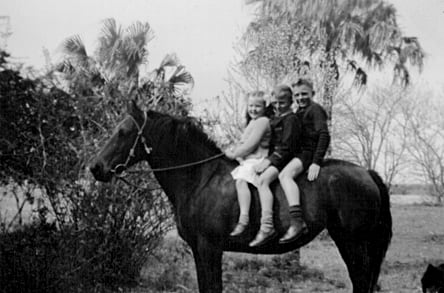 It was a thrilling time for Denis and I when Guy let us have our own buckjumping show. Guy would hold a calf while one of us hopped on its back. We had nothing to assist us, not even a flank rope, so we gripped with our legs and held onto the calf’s mane. Of course we never stayed on very long, but the excitement of the bucks and subsequent falls gave us great enjoyment and many giggles. I remember thinking I had rode one out when the calf just propped and remained stationary. As I relaxed it took off again as quick as a bullet, leaving me literally sitting in mid air.

I can’t remember Dot being particularly religious, as she never left the farm to attend Mass on Sundays. Perhaps she was excused from the weekly service because of her distance from the church, which was in Taree. However, I don’t think she ate meat on a Friday, as was the custom in those days. I am sure that she made the yearly effort to attend Easter Sunday service in Taree and receive the sacraments. Guy would accompany her on this yearly occasion and once, while positioned in a pew beside his wife, he noticed a landowner whom he considered a very miserly man, especially with the share farmers who worked his farms. As this person knelt and received his communion wafer Guy commented, ‘There goes the old bastard for a free breakfast.”

Guy had a great interest in horses and claimed that they should never get the better of you. A neighbour had a draught horse that refused to allow the farmer to remove his blinkers and wore them for some time before Guy accepted the challenge. I don’t know how he did it, but the horse was free of blinkers the following day. When he was younger he was on a bolter that had the bit between its teeth and going flat out. Guy was riding bareback, which meant he did not have the advantage of stirrups or knee-pads. As they galloped beneath an old peach tree he reached up and broke off a dead branch, which he swung and hit the horse between the ears resulting in the horse collapsing as it fell unconscious!