Dot and Guy eventually moved to what was known as the Cundle Plains, situated just north of Cundletown on the way to Ghinni Ghinni. Today, a vastly improved Pacific Highway goes past the front gate, as did the earlier highway of the same name. The 50-acre dairy property was owned by one of the Blore family – he was still share-farming – and it fronted the Pacific Highway at one end and the Manning River the other. Usually the milk cans were collected by what was known as the cream boat, which called twice a day in the summer and once a day through the winter, cows producing less milk in the cooler weather. People along the river, mainly the women folk, would use the cream boat to go into town in the morning on shopping day, then return on it in the afternoon when the boat went for the afternoon milk collection. Children also used this to commute to school and back. When staying through the week, I also used this exciting diesel driven vessel, both for school and general visits. Sometimes I rode my pushbike from home in Taree to the farm and occasionally I would even walk from home out to Cundle Plains.

When the Manning River flooded and the swollen waters could not combat the tide pushing against it from the sea, Guy would take the cans to the highway by draught horse drawing a slide. The slide was a platform that had two timber rails underneath which slipped over the mostly level ground and grass that was devoid of rocks and stumps. Slides were common in this type of country and carried people and produce easily around the farm. From memory I seem to recall that the slide was used more than the dray. We would all hop onto the slide when we went on picnics in a rare cluster of trees that grew about halfway to the highway. Eventually I would ride Whinny, a horse of about fourteen hands, on these or any other occasion. 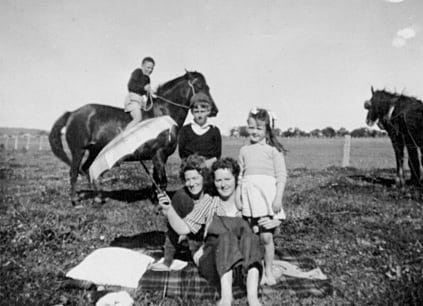 Picnic on the farm. A young Chris/David on horseback, Denis & Marie standing, Ev Woodland, (Chris/David & Denis’ mother) and Dot Prior.

A pair of fine Clydesdales were the literal workhorses of the farm. They were both well-behaved animals, though Bonnie did have one unsociable habit. When being pulled around on the slide the passengers were not very far off the ground and would often suffer from the abdominal gasses emitting from below Bonnie’s tail. When this occurred Guy would say disgustedly, ‘Bonnie, you trollop!’ Guy helped Denis and my vocabulary to expand and I can recall that he was the first to make me aware of the simple word complicated.

There were often problems when Bonnie and Prince were allowed to forage in the house paddock. I ran into the house one day yelling, ‘Guy, the horses are in the garden.’ The two draught horses had pressed against the wire enclosure and pushed it in far enough to allow them access to some of the enticing vegetables. Guy began swearing, saying exactly what I don’t recall, but I remember vividly his reply to Dot as he grabbed his stockwhip off the wall on his way out the back door: ‘Jesus Christ and all his bloody angels won’t stop me!’ In vain she had asked that he control his language.

Their main supply of water was a small corrugated iron tank outside the kitchen, which had a pipe through the wall and a two-way brass tap very low down the wall. Pressure was very low of course, more so when the tank was low. Out the back was a well from which they usually hand pumped their drinking water into a large jug. Further along was the toilet, which necessitated emptying and burying by Guy when required. There was no bath. Bathing was done in a large galvanised tub, usually in front of the fuel stove, particularly in the winter. Large amounts of hot water were heated in the copper and a large caldron on the stove would be used for topping up. The stove top was where we cooked the many mushrooms we found in the paddocks. A little butter was smeared on the stove top and the mushrooms place there till cooked.

Often Guy would use a little kerosene to help light the fuel stove in the early morning. This accelerant was kept in an old lemonade bottle on the hearth where Denis noticed it one day. He didn’t swallow much before he realised the contents of the bottle were not as he had thought. Nevertheless, the adults watched him closely until they thought his condition was not going to deteriorate.

From memory the dairy was only about fifty or sixty metres from the house. The barn was located on the house side of the dairy and, sensibly, much closer to the dairy than the house. The barn provided us children with another exciting area for play. Other than heaps of hay, corn cobs and the like, there was, unbelievably, the doped canvas fuselage of an aeroplane suspended from the roof. The building was not large and Denis and I spent many happy hours climbing into the cockpit, shooting down the Japanese or German enemies and sometimes ‘parachuting’ to safety when ‘shot down’ by Zeros or Messerschmitts. The hay provided a soft and welcome landing for the brave young Australian pilots.