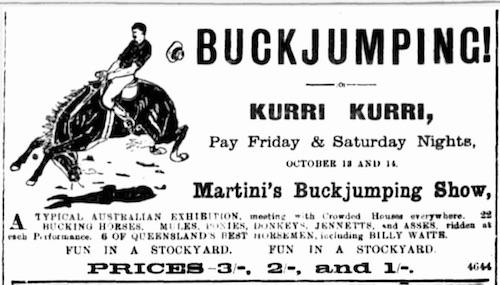 They showed at Stanthorpe, Tenterfield then onto Bangalow for the nights of 21 and 22 March 1905. A detailed ad in the Northern Star of Lismore mentioned that:
12 Champion Buck-jumpers Ridden each Night, including Bobs. £10 challenge to All Comers. Martini is prepared to back BOBS to throw any rider in Australia, in poley saddle in less than five minutes.

Growing in fame the Bryamine buckjumper now had the name of Bobs. Bad weather ensured that the two nights organised for performances in Lismore did not occur.
Eventually a total of 2 300 persons pay to see The best and most novel show ever seen in Lismore, over two nights on 11 and 12 of April. They then excite crowds over several nights at Casino where several local riders fancy riding Bobs. However they had barely sat in the saddle when they were launched into space. Martini wired from Casino to a Toowoomba friend telling him that Bobs threw Sydney’s Champion, Prendergast, on the third buck.

Heading South and Down the Coast to Parramatta

On their way south to Grafton they did shows at South Woodburn and McLean.
The unfavourable conditions continued and the Grafton Show and Martini’s buckjumping show and picnic were postponed. However, when they finally opened on Saturday 8 April on the Grafton Market Reserve, they, as usual, played to an appreciative audience. Of Martini, the Northern Star had this to say:

Mr. Martini gives a performance on the horizontal bars, which the bills correctly describe as “marvellous.” He throws somersaults forward and backward from bar to bar, and the manner in which he spins round the bars at arms length, like a wheel and suddenly releasing his hold springs to vertical position, poising himself erect on the bar, must be seen to be believed. He did not make a single miss, and on the horizontal bars we never saw his superior, …

A local rider by the name of McPherson was thrown clear of Bobs on the third buck. Bad weather again prevents their reopening at Grafton until Wednesday 3 May. It is here that we get a description of the exhibition area in which they performed. It was described as a large roofless, canvas enclosure. (The standard travelling show rings of the time were 42 feet diameter.) It would be interesting to learn how long and wide, or total diameter, it was. The buckers Kruger, Ned Kelly and the Ringer were still performing well, but were not the drawcards that Bobs was. A contestant, McRae from Glen Innes, volunteered to ride Bobs and for a little while his ability looked promising,

… but “Bobs” swerved suddenly round at the edge of the ring, plunged head down into the middle of it, and unseated his rider, who got into a Tod Sloan style …

McRae had stuck to Bobs for 25 lively seconds, for which Martini rewarded him £1 for his agility. Of course the usual names are present: Billy Waites, Mena Val, who:

… does some clever aerial wire walking and trick bicycling. Martini also promises to give a benefit to the Grafton Hospital before leaving the district.

The entourage then performed at Ulmarra, McLean and Harwood (Monday 15 May), Brushgrove, Lawrence then a return to Grafton for a performance on the 20th, ensuring Bobs and Billy Waite received a good coverage in the local The Grafton Argus, which  said.

The feature of Saturday night’s show was the- mounting of “Bobs” by Waite. This champion horseman, while the horse was rearing, took a flying leap, fully six feet, in the air, and landed on the horse’s back. Though assisted in the spring by his hold on the horse’s head. It was a splendid feat. He then sat on the horse without the use of stirrup-irons through a number of bucks, at last coming off over the horse’s head.

Following this show Martini donated the previously mentioned benefit to the local hospital before heading off to Bellingen to perform, where Mr J Martini was the MC for the Race Ball. They then moved down to Kempsey, performing there, then at Wauchope, Kew, Coopernook, Taree and Wingham, where Billy Waite rode Bobs till, something had to go, which was the girth! The audience was greatly amused by the juveniles attempting to ride Midget, the Shetland pony. As usual Miss Mena Val received enthusiastic applause for her slack wire walking and trick bicycle acts, and Nugget the clown was also very popular.

For at least one night in Taree, Martini permitted local roughriders to ride in saddles with 4-inch kneepads. When the horses became weary the use of a loin rope was often used to ensure they bucked. Other than buckjumping, wire walking, clever cycling, clown comedy, children trying to ride mules and small horses, the bar work of Martini, musicians and dancing were also prominent acts. Travelling with them was a Joe Menadue who was described on the handbills as the champion cornet soloist of Queensland.

Three Hours of Fun is what the Martini show advertises for the nights at Taree. A lady roughrider by the name of Stoken from that town attempted to ride The Ringer in a man’s saddle and gave a wonderful performance before she was eventually thrown. Undaunted she was given another horse to ride and could not be shifted from the saddle. She was given a challenge to ride again at Wingham. (Wingham is only 13 km from Taree, but the show played at both places over several nights.)

One press item expressed disappointment that the roughriding performance demonstrated by Miss Stoken received very little acknowledgement by the press, but the story was spread widely for some time and appeared as far across the country as in the Coolgardie Miner on Friday 28 July, and in the Daily News of Perth the day after.

Martini was always on the lookout for good buckjumpers and frequently advertised for them, as well as good horses for the season, sometimes for only the evening, from the local areas they were passing through. That is, of course, how he got Bobs.

From Gloucester to Maitland

They journeyed on through Gloucester, Krambach, Nabiac, Dungog, Clarence Town, Seaham, Raymond Terrace, arriving at Maitland on Thursday 27 July.
The local paper said of the opening night that the greatest interest of the evening would be:

… an encounter between the Queensland equine terror Bobs and a local man by the name of Curly.

Unfortunately Curly sat on Bobs for less than a minute, so did not receive the £10 offered by Martini to ride the outlaw for two minutes. Some local Maitland horses gave Billy Waite and Jack Combo a very lively time of it, and Billy Waite received an injured leg caused by a loose stirrup-iron swinging. As usual locals aspiring to be recognised for their horsemanship were not in short supply. In colourful coverage of their attempts the local newspaper reported:

… the equine catapults propelling the foolhardy equestrians to strange flights through air.

The usual glowing tributes were showered on Mena Val and he who is without rival on the bar. On the Saturday evening performance Martini handed over half the takings of the evening to the treasurer of the Maitland Hospital.

In the previous Tuesday edition of the Maitland Mercury this interesting letter to the editor was printed:

MR. MARTINI’S CHALLENGE.
Sir, — In your issue of Tuesday night’s “Mercury”, referring to Martini’s buckjumpers and riders, I notice that Mr. J. S. O’Donnell threw out a challenge to Mr. Martini, to the effect that he would back me for £100 to ride the buckjumper Bobs. Now, I would like to impress on Mr. O’Donnell that, should a favourable opportunity present itself, I am in a position to act on my own finances, and need no assistance from him.
Furthermore, I would like to point out that this challenge was thrown out without my knowledge, the only intimation I have had of the matter in seeing it in print in your valuable columns.

Hoping you will insert the above. Yours, etc.,
ANDREW THIBAULT.
Tamworth, Aug. 3.

Little more is heard of this incident, though Martini said that:

Thibault would have to ride in a light poley saddle, as he would not bet against a man in a tub!

In August the intrepid retinue and their menagerie entertained the populace of Minmi, West Wallsend and headed towards Newcastle where they commenced their suburban tour, with the dates given as 1, 2 and 4 of September, to be played next to Marcus Clark & Co in Hunter Street. For the first time advertisements appeared showing that the troupe had added a new performance to their show, which they called Fun in the Stockyard. This apparently provided particular entertainment for the children and early teenagers involving the attempted riding of ponies, donkeys and possibly calves. Understandably, the clown would be involved with these and similar activities. There was, of course, entertainment for all persons of most ages in attendance. The Fun in the Stockyard feature was to prove very popular and was later copied by other travelling buckjump shows.

By now their advertisements included the statement:

Two Years and eight months Touring Queensland, and now returning from the Gulf.

They also advertised that they had twenty-two buckjumpers and:

Bad weather, their constant threat, disrupted the Newcastle performances, but the group had a good season in the Hunter region. The famed outlaws Ned Kelly and Kruger were still attracting the numbers, but Bobs was still the main drawcard.

Martini was true to his statement of always assisting charitable institutions where he could and one evening he donated a third of the takings to the Newcastle City Band Contest Fund. He later assisted them by working alongside the band when they were challenging other bands. The band reciprocated and performed for the buckjumping show on at least one occasion.

As usual the show was a huge success on Saturday 23 September, but Martini was unable to perform because of an unexplained imposition.

On the evening of 2 October Martini gave a Mr Cook, the vice-president of the Wallsend Hospital, a donation of £4.16s, one third of the evening’s takings, for the hospital.