Other than his birth at Araluen, where his father was gold mining, little is known of young Martin’s earlier life. His father, William, had arrived in Sydney at the age of 20 years aboard the bounty ship Columbia in September 20, 1854. William had brothers, Patrick and Michael, already living in the colony. The brothers had arrived in Sydney on the Sir George Seymour in 1852, Patrick then 17 and Michael 33 years. William’s parents were listed as Patrick (deceased) and Brigit (nee Mulvihill). The family’s Native Place & County was given as Ballinakill [also Ballynakill], Co Galway, Ireland. The three brothers had all given their occupation as Farm Labourer.

Martin’s mother was Julia Feehan, who had arrived at Port Phillip from Co Kilkenny, Ireland, on the Ocean Monarch in June 1856. William (most likely called Liam) left the colony of New South Wales for the goldfields of Victoria where he met and married Julia two days after Christmas Day in 1860 at a Mrs Daniels’ of Deep Creek, Keilor Plains, just out from Melbourne. His occupation was given as a miner, and his wife was described as a servant. Julia’s age was recorded as 23 and William’s as 27.

Two years later their first child, Patrick, was born at ‘Frye’ – probably Fryers Creek, (later to be called Fryerstown), near Castlemaine and nearby Irishtown – and another son, William, was born in 1865 at Wanalta, about 100 km north-east from Castlemaine. Nurse Mrs O’Malley delivered Martin, on April 28, 1868 at Redbank, in the middle of the picturesque Araluen Valley in south-eastern New South Wales, where gold had been discovered in August 1851. Obviously William snr was still mining. Two daughters were born in the same district: Johanna in 1870 and Mary in 1873. Another daughter’s birth was registered in 1877 at Broulee, near today’s Bateman’s Bay. This, their last child, was given the mother’s name of Julia.

Records shows various spellings of the family’s surname. Breheney, Breheny and Breheney are, understandably, common interpretations of this Irish name. However, when Martin’s birth was registered at nearby Braidwood it was recorded as Berkerry and Julia’s was given as Brekewy. Remembering that William’s first language was most likely Irish, these spellings perhaps indicate both a certain pronunciation and interpretation. Interestingly, Julia’s death certificate gives the spelling of her father’s surname as Feehon.

Almost nothing is known of Martin Breheney’s younger life following his birth at Araluen. Most of what we know came from an interview in the Bulletin – the Bushman’s Bible, as it was known – in January 1906, the year before his untimely death:

My name is Martin Breheny [sic]. I was born at Araluen, N.S.W. in 1868. Had a bit of gymnastic practice as a nipper in Sydney; then picked up with Harmston’s Circus and Wild West Show; and was with them for years as an all-round athlete. I struck Melbourne with Harmston’s in Martini-Henry’s year, and the boys thought I was so smart on the bars (my speciality is bar-work) that they said, “Why, he’s a regular Martini!” And the name has stuck to me ever since.’

As Breheney states, his stage name, Martini, came from the racehorse that won the 1883 Melbourne Cup, which in turn comes from a well-known rifle of the time. The Martini-Henry rifle was abbreviated to just Martini, as the Melbourne Cup winner’s name probably was at the time. Martini is, of course, not far from his first name, which was Martin, so the Martini was only an extension created by the Melbourne Cup winner. While he was always called Mart by those who new him, his full stage name became James Martini, mostly abbreviated to J Martini.

Breheney is reported as saying to the Bulletin reporter that he had been performing as a child, as was common in those days, and added that, he had a bit of gymnastic practice as a nipper in Sydney, before he was with Harmston’s in Melbourne in 1883 at 15 years of age. To be with Harmston’s in 1883 seems unlikely as there is no mention of that circus in Australia until late 1889. As we will see, Martini is also associated with other circuses. Whoever he was touring with in those earlier days, he obviously had considerable talent with his performances on the parallel bars and gymnastics generally.

Unfortunately for today’s readers, advertising and reporting on these circuses and other travelling shows, had not developed in the early 1880s, but improved as the decade progressed.

Martini’s name began to appear in newspapers and the Adelaide Advertiser on Saturday 24 May 1890 stated Harmston’s was to appear in Wakefield Street on the evening of the Friday 30th May. The reporter observed:

An unusually good exhibition on the triple horizontal bar was given by Martini and Gilbarto, the former especially distinguishing himself, and Barotta supplied the comic element.

For a period, Martini was commonly associated with these two other performers.

Broken Hill was visited by Harmston’s Circus in July. The circus performances included a Saturday afternoon party for all children under the age of 14. The invitation was issued by Mayor Thomas Coombe. 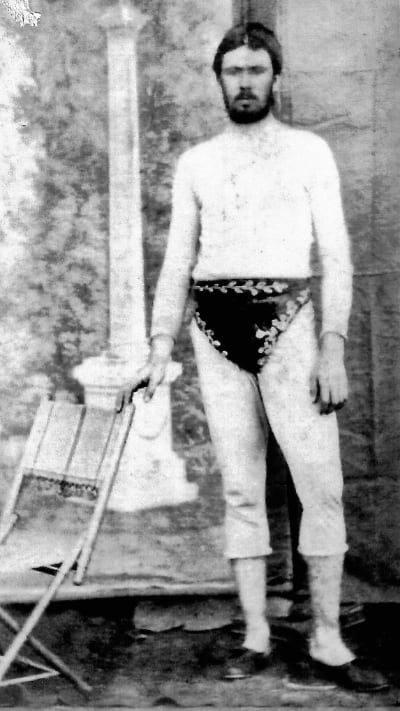 Martin Breheney, aka J Martini the showman, champion performer on the bars

In August the steamer Buninyong sailed from Adelaide with the Harmston family aboard, also circus proprietors Mr and Mrs St Leon, Martini and many others. In September Martini, Gilberto and Barotta were mentioned in the Melbourne Age as Harmston’s performers in both Bendigo and Melbourne.