Martini, with Harmston’s, turned up in Singleton NSW as Harmston’s Circus and Wild West Show on Friday 23 January 1891. The show contained a trio of Japanese balancers, a Madame Minette, who possesses a jaw of iron, Madame Le Blonde performed as a rider and Martini and Barotta showed their skills on the bars with exceptionally clever feats. The local newspaper said that the streets of Singleton were almost deserted on the night of the performance and that there were fully 1500 who patronised the show. The attachment of the Wild West Show phrase to the circus’ name indicates a shift in such travelling shows and awakened possibilities in Martini’s mind. The inclusion of these Americans displaying wild west activities such as rough-riding, lassoing and revolver shooting no doubt explained the unusual high attendance for the evening.

Amongst the American contingent was a colourful character who went by the name of Texas Jack and possessed a fascinating background. He was named after the man who found him when droving cattle through Kansas where he found two small girls and a five-year old boy whose family had been killed by Native Americans. This boy took the name of Texas Jack Jr after his saviour Texas Jack. The latter received the nickname while droving cattle across the famed Chisholm Trail.

The older Texas Jack’s formal name was John Baker Omohundro. He was born in 1846 and developed into a larger than life character. During his relatively short life – dying in 1880 just before the age of 34 – he had been a frontier scout, served in the Confederacy during the American Civil War and became a legendary figure of the American Wild West. He also acted in numerous theatre productions. He was associated with well-know names like Ned Buntline, Wild Bill Hickok, President Lincoln’s assassin John Wilkes Booth and the ill-fated General George Custer.

When Texas Jack died in June 1880, Texas Jack Jr dropped the qualifying junior from his name. The young Texas Jack had understandably become familiar with the interests and lifestyle of his foster father and became a sharpshooter and stunt rider.

The Australian bard, Henry Lawson, wrote the poem A Word to Texas Jack as he was fed up with Americans visiting Australia and returning to America because:

They’ve left behind no larnin’ but they’ve carried off our tin. 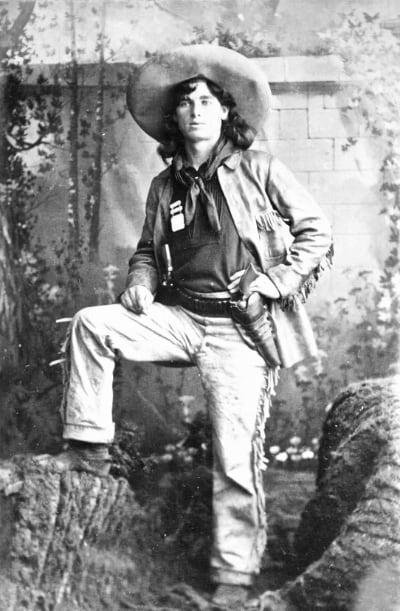 A survivor of his family’s massacre by native Americans as a child, he emulated his saviour and mentor, the original Texas Jack, becoming a roughrider, sharpshooter, and theatrical showman. One of his productions was based on the Australian bushranger Ned Kelly.