Lance Skuthorpe was one of Australia’s greatest horseman and showman. He was also an outstanding yarn spinner and reciter of Australian bush poetry. While travelling through bush towns in his earlier days he would start up one of his performances, be it horsemanship, poetry or all combined, to attract the locals and, of course, to pass the hat around. Now days we would call him a busker. There is at least one book on this remarkable man 1. Skuthorpe’s greatest feat was to copy poet Adam Lindsay Gordon’s famous leap close to Blue Lake near Mt Gambier. The obelisk which was placed near the site known as Gordon’s Leap reads:

This obelisk was erected as a memorial to the famous Australian poet. From near this spot in July, 1864, Gordon made his famed leap on horseback over an old post and rail guard fence onto a narrow ledge overlooking Blue Lake and jumped back again onto the roadway. The foundation stone was laid on 8th July 1887.

While Martini had been travelling with Harmston’s and subsequent travelling shows he was obviously thinking about forming his own similar enterprise. It is known that he and Skuthorpe were not of compatible natures and were less so when Martini made the break. It was following an injury sometime in 1900 that Martini decided to form his own show. Author Di Moore says that Lance Skuthorpe was not very happy when Martini, Mena Val, Jessie Hunt, a lady named Jewl and a young bloke by the name of Callaghan left his buckjumping show to begin a competitive travelling show.

Mena Val was the stage name for Wilhelma Valdares, the Valdares Girls being a group of spectacular performing cyclists. Mena Val also performed at wire walking and whip cracking. Jessie Hunt (later Hicksman) was a roughrider and Jewl had a song and dance routine.

Typical of the times, the details of women were overshadowed by the males and little is known of them. Women were mainly referred to as a Miss or Mrs so-and-so and little more. The problem was exacerbated when female performers were using stage names. Some women who were roughriders were often not referred to by name in the press, but just by their gender. One of the most confusing mysteries of this story was determining who was the woman who became known as Mrs Martini.

In her book The Lady Bushranger (Hesperian Press, 1996) Pat Studdy-Clift claims that Elizabeth Jessie Hickman, nee Hunt, was Mrs Martini, Jenny Hicks in her history titled Australian Cowboys, Roughriders & Rodeos (CQU Press, 2003) states that Jane Kemp, or Miss Kemp, was Mrs Martini. Di Moore, the granddaughter of Jessie Hunt/Hickman says in her book, 2 that a song and dance performer known as Jewl, with the stage name as Miss Devine, was Mrs Martini. This is collaborated by the press coverage of their performing attendance at the Wangaratta Benefit in January 1901.

To further confuse the issue, there has been no marriage certificate found for Martini/Breheney, so the union must have been a de facto relationship. The Jane Kemp mentioned had performed with Professor’s Kemp’s buckjumping show, but it is not thought that she was related to the colourful larrikin who called himself Professor Kemp, Paddy Kemp and other monikers, though his real name was John Patrick Daley. Growing up he was known as simply Jack Daley. Kemp was a horseman of great ability, a designer of saddles and, like Martini, Skuthorpe and others, ran a buckjumping show. A rather wild and unconventional person, Daley had troubles with the law, escaping from police and spending time in gaol when finally apprehended several years later. He had an equally eccentric brother, Richard Daley, who became an ordained priest. When in Rome he fired a revolver in the Vatican declaring that Ireland was now a free and independent nation. Apparently, brother – or Father, Richard – was a speaker of several languages and, amongst other learned subjects, taught the Irish their native language. 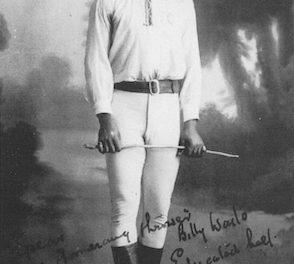